Midfielder James Kasak served a 20 yard ball into the box, and the most lethal striker in the city was on the other end. Markus Naglestad used a beautiful high-kick flick with his back heel to tap the ball past the keeper toward the near post. It was an Ibrahimovic-esque strike, and the only goal of CFC’s 1-0 Independent Cup win over Atletico Atlanta, who featured former CFC’er David Koloko.

“It came in really high, and I just tried to get something on it and luckily it went in,” Naglestad said.

“I try to anticipate what my teammates do, and try to do the things right when I have the ball.”

After a storm caused a 45 minute delay, the boys in blue (or in this case, white with blue numbering), focused most of their attacks down the left flank, which featured wide midfielder Kasak and winger Felipe Oliviera. After experimenting with a 4-3-3 last match, CFC went with a 3-43 with midfielder Juan Hernandez playing more of a false-nine role.

“I think Markus is good at playing there (as a nine), but in the natural flow of the game he gets the ball played in with his back to the goal as a nine, which means he’s not facing where we want him to face,” coach Peter Fuller said about Naglestad not being a nine in an ideal world. “I want him underneath and running onto things, and people are seeing why we made a play for him.”

CFC looked to have a fastbreak going in the 25th minute after Hernandez pounded on a wayward Atletico Atlanta pass. He threaded a beautiful through ball to his teammate on the right, but the runner couldn’t get a good first touch despite having tons of open space ahead, and the ball trickled away.

There were a few other chances to score, but the home team seemed stuck at 1-0. The defense, led by Richard Dixon, Nick Spielman, and Kai DaSilva, kept the Atletico chances to a minimum. But the offense was just a bit off, with passes being a little out of reach, runs slightly late, and chances being slightly sloppy. The team did their best to push the ball down the wings, but the crosses were either late or did not happen at all.

“We (wasted) a bunch of chances, but I think that in this situation in July, I believe as long as we’re creating chances I’m not going to be too hard on the guys,” coach Peter Fuller said.

CFC avoided disaster in the 44th minute, when keeper Alec Reddington’s punt was deflected by a charging opponent. He scrambled to dive back onto the ball when an Atletico player tried to play an ensuing through-ball. CFC went into the half still up on the UPSL team by a goal.

“Today, they had a couple of shots where Alec was forced to make some saves, and one even hit the crossbar,” Naglestad said. “With all respect to Atletico Atlanta, we’re going to play better teams that will punish us if we don’t sharpen up.”

Oliviera almost made it 2-0 in the first minute after halftime. He broke loose on the counterattack on the left side. But his first shot was blocked by the keeper, and then the rebound was also deflected out of bounds.

CFC’s fans had their breath almost taken away in the 64th minute when an Atletico striker cut to his inside right foot and sized up a shot from 20 yards away. His rocket looked true, but bounced off the top crossbar instead of in the net, and CFC was once again fortunate to still be up 1-0.

Less than two minutes later, Chattanooga should have been up 2-0. Kasak had the ball on the left wing and was being hounded by a defender on the counter. Standing parallel to him was Naglestad, who was just waiting for a pass so he could tap in the easiest goal of the year. Instead, Kasak tried to take the shot himself and couldn’t convert. CFC got a couple of more wonderful chances in the next few minutes, but like in the first half, they just couldn’t get the ball past the keeper.

“I thought he did some very good things, and some very naïve things,” coach Fuller said. “He tends to get a little casual in the midfield, so it’s a little bit of a mixed bag. But he’s a young player with a ton of potential.”

Chattanooga had at least three shots blocked and even more bodies hit the ground on one of the wildest sequences of the year. After Hernandez sent in a short cross, the home squad had multiple chances to score, but every shot was deflected by either a keeper or a defender.

As ugly as the game was, Chattanooga FC held on for the win in front of 2,094 fans. Atletico Atlanta got one more great chance in the 88th minute when a Tate Robertson tackle just outside the box resulted in his second bad foul of the game and a red card. Atlanta’s Israel Kami took his best shot, but the volley was blocked by the wall.

CFC heads on the road next week to play Savannah Clovers next Saturday, before traveling to Boone for a rematch with Appalachian FC on the 21st.

_This story originally appeared at Chattanoogan.com. _

CFC return home on Saturday, July 24 to face Soda City FC from Columbia, SC in a match that could decide the southeast region of the Independent Cup. Grab your first choice of seats early at CFCTIX.com. 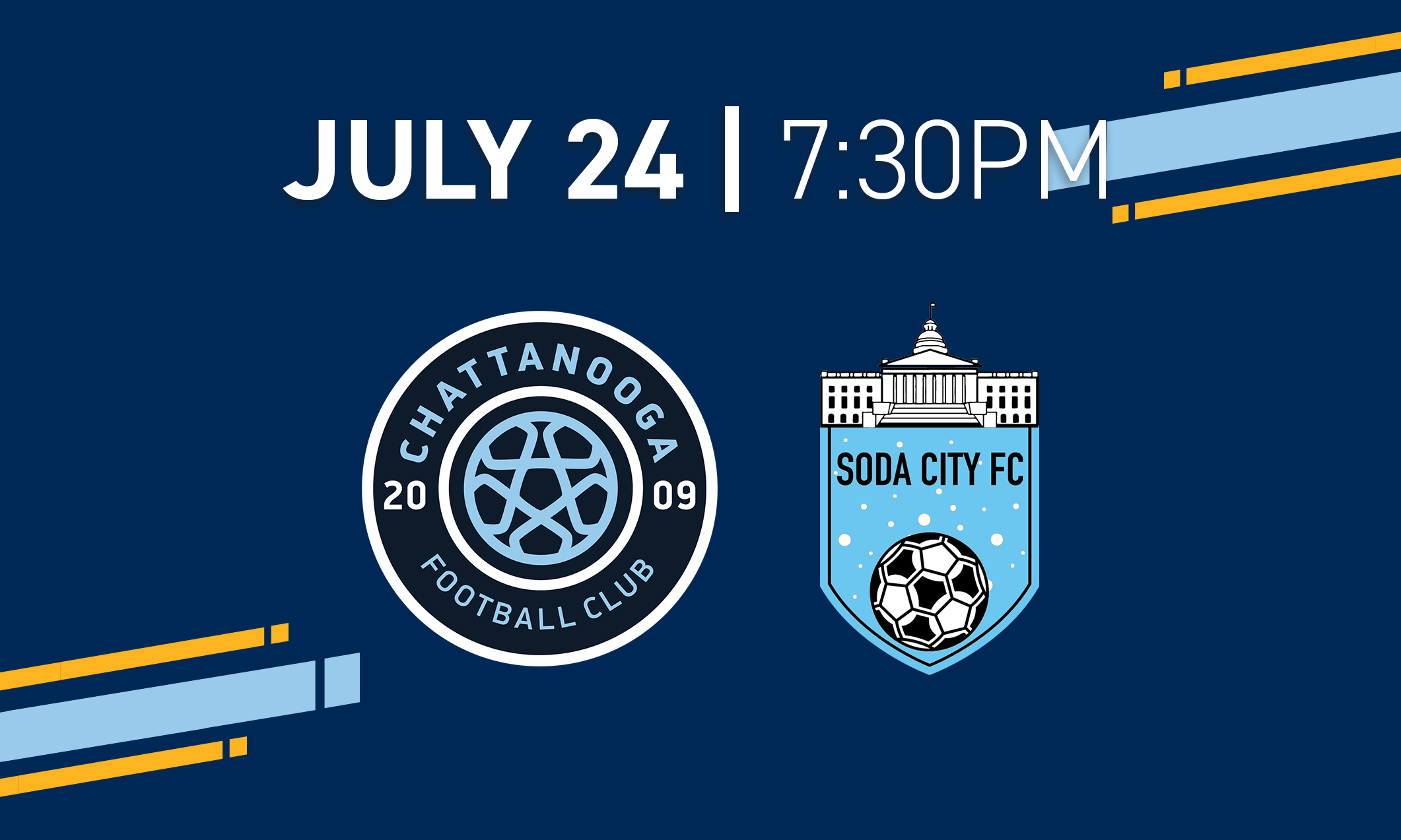