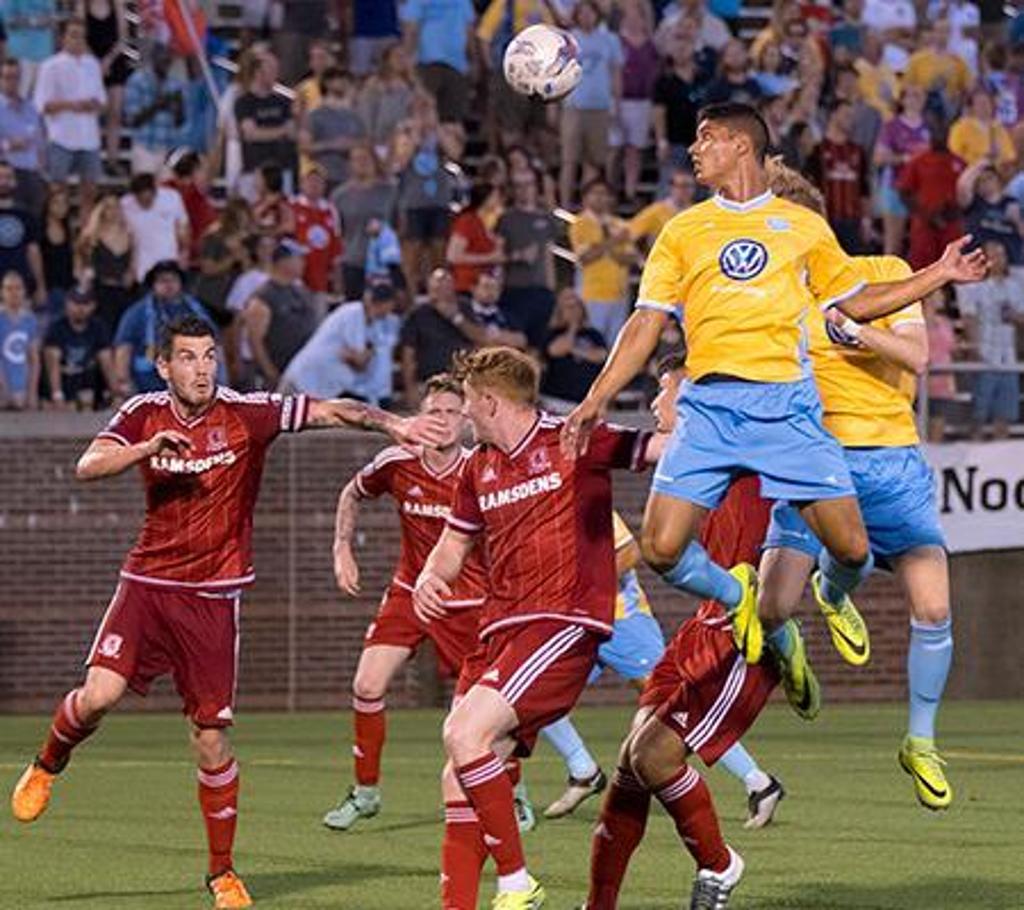 David Perez had two great chances on goal for the Chattanooga Football Club on Wednesday night, but each ended with unkind results.

"Almost," he said after the match. "Almost."

The same couldn't be said for CFC's opponent, Middlesbrough FC.

The English professional club's U21 team defeated Chattanooga reserves 4-0 in a friendly exhibition played in front of 2,175 fans at Finley Stadium.

CFC, of course, has a much more important match to be played Saturday, in the National Premier Soccer League semifinals against Sonoma County Sol, so few -- if any -- of the players that will participate in the playoff match were on the field Wednesday.

That match will begin at 7:30 p.m. at Finley. The team announced late Wednesday evening that it has extended its deal for $7 tickets until 2 this afternoon. After that they will be $10 on Friday and $12 on Saturday.

Middlesbrough FC's team was made up of mostly professional players that will eventually play for the main club, and CFC head coach Bill Elliott was pleased with what he saw from his reserves.

"I think this was fantastic for our club," Elliott said. "Frame it in the context of we're an amateur side, and every kid on Middlesbrough is a pro already as far as I understand it. So our reserves get the opportunity to play against pros tonight, and I think we did remarkably well, all things considered. There were some real bright points individually."

Perez had two shot attempts -- one in each half. The first-half attempt, lofted high over the goalkeeper, hit the crossbar, while in the second half the goalkeeper had to range far to his right to make a save. The team interchanged goalkeepers, with Tom Halsall and former Notre Dame standout James Teal receiving time.

Middlesbrough's Callum Cooke scored in the 39th minute to send his team to halftime up 1-0. The other goals came from Arnel Jakupovic in the 61st minute, Robbie Tinkler in the 71st and Hayden Coulsen in the 88th.

"I'm happy with it," Elliott said. "Some of the local players from local colleges and guys that grew up in Chattanooga gained invaluable experience that will hopefully translate into them being able to make contributions for CFC in the future."

BUBBLES: First 400 kids through the gates on Wednesday get a free bubble blower. Because who doesn't love bubbles?… https://t.co/5e9yV0QqGs

If you see @Frankadelic5 snacking today, wish him a happy birthday! https://t.co/FGffdQOly1

Honor to have hundreds of young @CFC_Academy athletes with us on Saturday. See you again soon! #BetterTogether https://t.co/Xgjto5W1h0