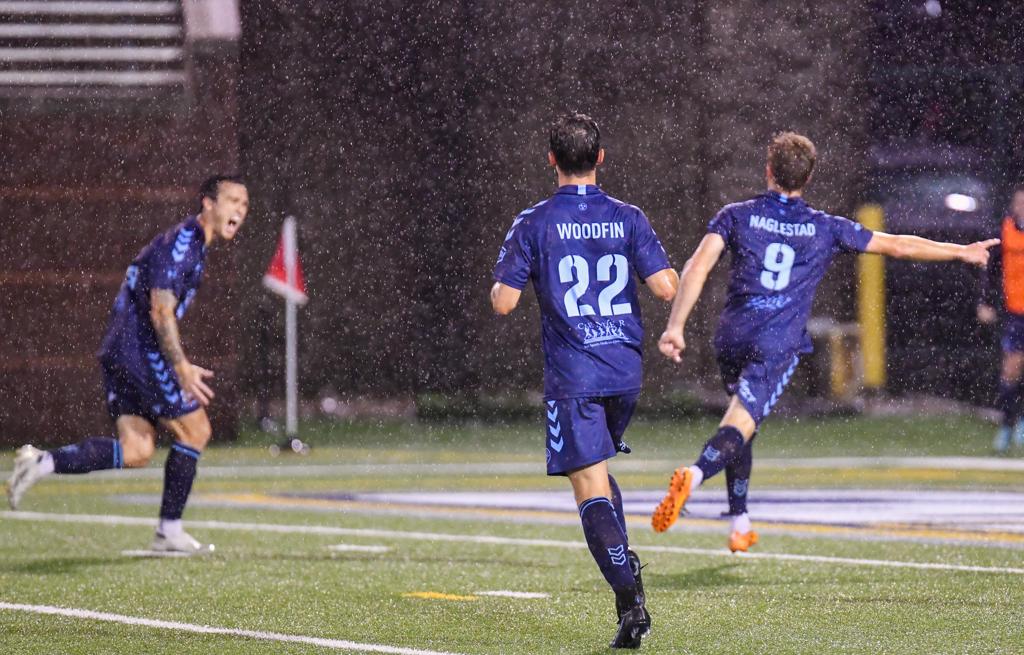 The supporters were outraged, the players were frustrated, coaches were furious, and what appeared to be a Chattanooga FC 1-0 victory was now a 1-1 draw with San Diego. Officials had clearly indicated the game was over—the only issue being that they declared an end while there were four minutes of stoppage time left to be played.

And so in a truly strange scene, players had to stop their post game rituals and restart play.

Chattanooga FC was holding onto a one goal lead when the first whistle blew, but San Diego stormed back to equalize after the restart and took a point for itself.

Chattanooga FC was the aggressors early in the game, and they flooded the box with numbers and slung cross after cross in search of a goal. Winger James Kasak and right-side striker Daniel Jackson both attacked the flanks and tried to pick out passes to Markus Naglestad and Sean Hoffstatter.

In the 21st minute, Naglestad crashed into the box when a wild pass spiked into the sky and fell into open space. His shot was well-struck but it went straight to San Diego’s keeper, who is someone CFC will become very familiar with over the next week.

San Diego also became well-acquainted with CFC’s stalwart keeper Redington. A SD striker had nothing but green grass in front of him on a breakaway and just had to get the shot past CFC’s redhead.

Redington threw his whole body in front of the shot and snuffed out his adversary’s best chance at scoring. Redington did it again in the 35th minute when another thru-ball got past the back line, blocking a one-on-one.

CFC didn’t stop their attacking ethos either, and kept shooting and making deft runs. But as has been a familiar theme this season, all of those wonderful chances resulted in zero goals as the boys in blue could not finish their chances.

And this overwhelming emphasis on sending numbers forward left CFC vulnerable to the counter. If it weren’t for several great saves by Redington, San Diego would have been sporting a two goal lead.

“You can’t win a game if you don’t score goals, so I know I have to stand on my head and be great in goal to win games,” the keeper said. “I’m perfectly fine with the guys sending numbers into the box to score for us to win.”

In the second half, Chattanooga FC continued to throw numbers forward. Forward Daniel Jackson had a good opportunity in the 68th minute, but San Diego played great defense and CFC continued to be mired in a 0-0 game.

Markus Naglestad was the right person at the right place in the 88th minute. Cutler Coleman’s cross bounced off a defender, but was not cleared. Instead, the pass bounced right to CFC’s gifted goal scorer. He used a powerful strike to pop the ball past the San Diego keeper and gave the home team the lead. CFC survived the next few minutes of stoppage time and got their first victory in a month……..

……until the referees realized they had called the game too early, having only played three of the allotted seven minutes. That gave San Diego’s Eddie Benito enough time to equalize, and a frustrated CFC will get a chance to avenge the bizarre draw next week in San Diego.

“To be honest, I have no idea what they would have done if we’d just gone to the locker room and said ‘to hell with it,’” coach Fuller said. “We came out and played, and you saw what happened.”