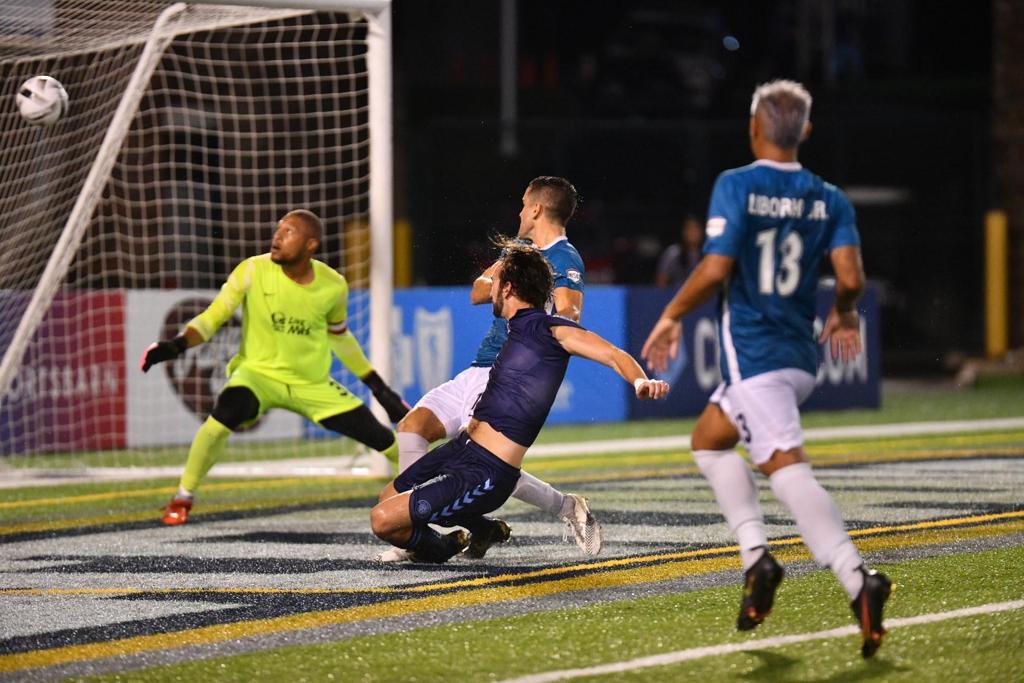 Bruno Mars serenaded the Cal United and Chattanooga FC teams at halftime, at least in spirit. As the pop star sang about how there will be rain in a recording at halftime, both teams began to trickle onto the soggy field after being pelted by water in an eventful but scoreless half. A drier second frame would see Cal United come away with a 2-1 win at Finley Stadium.

“Some of our defending deficiencies are based on attacking deficiencies,” coach Peter Fuller said. “If you’re giving the ball away in certain areas of the field, there’s no chance to defend those.”

The first 20-ish minutes were played under a pleasant evening sunset sky, with CFC dominating possession.

Defenders Shaun Russell and Nick Spielman were solid when asked to stop Cal United threats, and strikers Brian Bement and Markus Naglestad always seemed to be on the verge of scoring.

Then the rain started, continued, and then picked up intensity. In the 27th minute, Bement almost bent a completely soaked ball into the keeper from around ten yards away. The Cal United keeper tipped the ball over, and the next few CFC set pieces came close at times but could not get it past the keeper.

The rest of the half was dominated by set pieces and corner kicks. The ball ripped in from both sides and both teams had a fair shot at it. But on seven CFC and five Cal United corner kicks (stats courtesy of Jim Hicks), the defense came away from the aerial duel unscathed each time. The half ended as it began, in a scoreless 0-0 deadlock.

“It kills me, since I’ve spent my entire career priding myself on the idea that we’re always going to be better than our opponents on dead balls,” coach Fuller said. “We weren’t tonight.”

In the 58th minute, keeper Alec Redington made a fantastic save. A Cal United striker got just a sliver of space and uncorked a rocket toward the goal. He made a diving save to his left to stop the goal. But on the next corner kick, Christian Thierjung got his revenge.

He collected the ball and mashed a volley at Redington, who deflected the shot. However, Thierjung followed up on the shot like it was a two day-old email and tapped in the second opportunity to give Cal United a 1-0 lead. About ten minutes later, a fiery Cal United outfit took advantage of a fractured CFC defense to tap in another goal.

“We’ve cut way down on giveaways in the middle third of the field since we’ve gone more direct,” coach Fuller said. “But we had seven giveaways in that area and it resulted in one goal tonight.”

Chattanooga FC didn’t go down without a fight though. During stoppage time, substitute James Kasak roamed the left wing and used one of his many fakes to get past his defender. With his back to the goal, Kasak flicked the ball backward with his heel and then turned around and chased it.

After catching up to the prized object, CFC’s dynamic playmaker flicked the ball to a cutting Brian Bement, who was running across the face of the goal and shielding the defender away with his right shoulder. Bement’s kick under duress secured CFC’s one goal of the night. Chattanooga will play the Michigan Stars next Sunday.