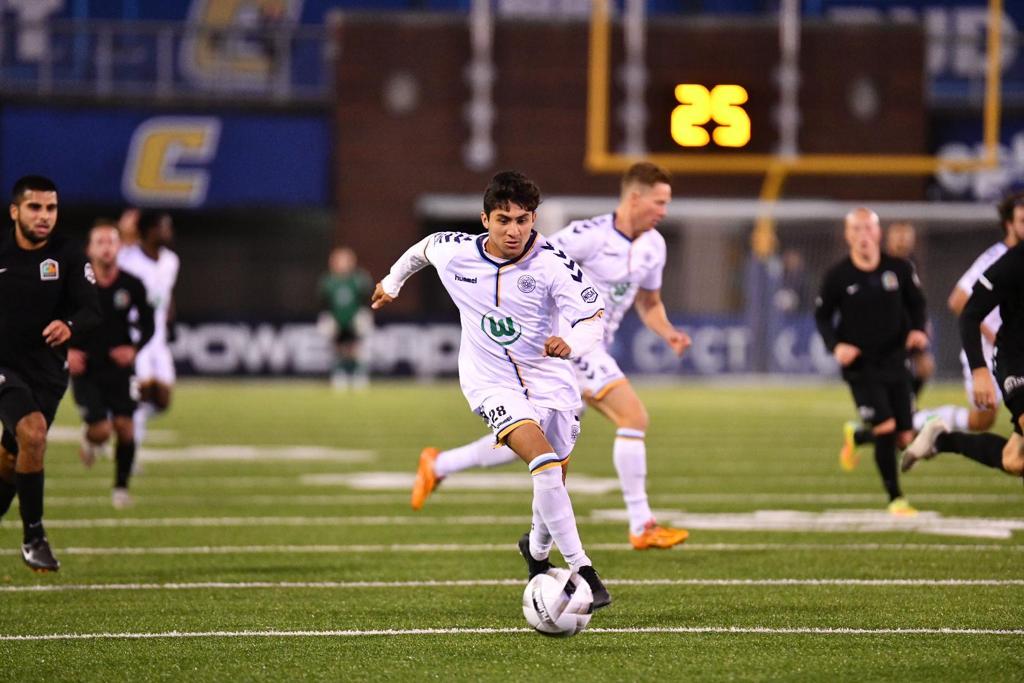 Damian Rodriguez pushed the ball toward the back-line in an effort to get past his defender on the right wing. The Chicago House defender rushed to confront the 18 year-old attacking midfielder and tried to stop Rodriguez’s momentum. But the teenager simply brushed the tackle attempt aside like Tyrell Price earlier in the week and continued to drive toward the goal.

After he got past the first wave, several more Chicago House players converged around him. That’s when Rodriguez sliced a low cross across the goal to striker Markus Naglestad.

The prolific goal-scorer tapped in the ball and gave Chattanooga FC an early lead in the 10th minute. CFC ended up winning the home match 2-0 on the cold November night.

“He’s been really, really good,” coach Peter Fuller said. “Where he plays is dependent on who is available because of fatigue or injury. In an ideal world, he would be on the left side of a front three playing as an 11. That’s where we scouted him as a young one in Dalton.”

The goals were superb, but the true stars of the game were along the Chattanooga defense, where Richard Dixon, Shaun Russell, and Nick Spielman locked things down for 90-plus minutes. And the few times Chicago House got a ball in a threatening situation, a referee’s flag would inevitably go up to signal the forward had been offsides. Goalkeeper Alec Redington was a vacuum in goal and intercepted or dealt with a variety of crosses and the occasional shot by Chicago House too.

“For me, the back three has probably been the staple of our team,” coach Fuller said. “People look at the goals scored on us, but most of our problems have come from giving away balls in attack, and giving them away in areas we can’t defend. That’s not on the back three, that’s on the midfield and front guys to be more responsible with the ball.”

CFC didn’t try to do anything too fancy or elaborate when in possession. Their favorite strategy was to either go direct and try to hit balls to Brian Bement or Naglestad up top, or to get the ball to Topher Marshall and Rodriguez on the wings. And when Daniel Jackson and Brett Jones spelled the two starting strikers, their speed paid off.

Coming in as a change-of-pace, Brett Jones blasted down the right wing around the 87th minute following a great Dixon tackle to give CFC possession. Jones then stopped, waited for his defender to be thrown slightly off-balance by the change of pace, and then accelerated into space. Jones then shot into the far post to give CFC an insurmountable 2-0 lead.

“All I’ve asked of the guys is for us to play hard and stay within our structure, and to not let people fault our effort at the end of games,” coach Fuller said of a team that entered the game ninth in the 10-team table in terms of points.

Chattanooga FC travels to Detroit to play Detroit City FC on Saturday, and then comes back home for their final home game of the season a week later against the Michigan Stars. CFC closes out their season with a road game against Stumptown on the 20th.

“We want to end on a positive note regardless of where we are in the standings,” Brian Bement said earlier in the week. “We all have pride and are professionals and want to get as many wins as we can. We’re expected to show up and give our best performance every day. We want to give the fans a performance they can be proud of watching.”