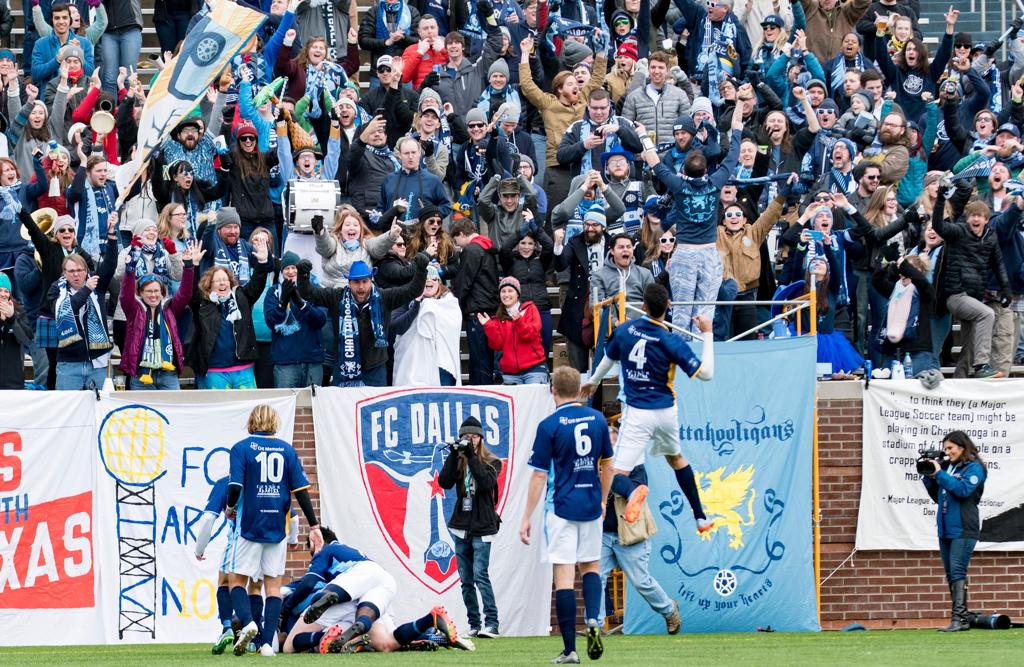 CHATTANOOGA, Tenn. – FC Dallas gave its starters and reserves 45 minutes each in a preseason friendly that finished 1-1 against NPSL side Chattanooga FC at Finley Stadium.

Mauro Diaz nearly unlocked the Chattanooga FC defense in the sixth minute, when he earned a free kick 26 yards from goal. The No. 10 opted for the quick restart and Michael Barrios was on the same page. FCD’s 2017 MVP timed his run perfectly and brought down the lobbed pass at the top of the six-yard box before being dispossessed by Chattanooga FC goalkeeper Homberto Pelaez.

Chattanooga FC earned its first corner kick of the match in the 10th minute. The home team sent a cross into the box that was headed away from danger by veteran defender Maynor Figueroa. CFC’s Joaoa Costa nearly recovered the loose ball but was put off by FC Dallas left winger Paxton Pomykal.

Pomykal picked off a pass in the middle of the field in the 28th minute and quickly got the ball to the feet of Diaz. The Argentine weaved through three players on the left side of the area before chipping a pass to Barrios at the far post. The Colombian headed a shot on goal but Pelaez was there to make the save.

Matt Hedges got the slightest of touches on a free kick from Diaz in the 32nd minute. The UNC product timed his run well and stretched to get his right foot on the end of a free kick that was played in from the left flank, roughly 30-yards from goal. Hedges’ touch froze Pelaez and the ball trickled into the far corner of the net to make it 1-0.

Chattanooga FC pulled a goal back just before halftime, when Cabello worked free of Reggie Cannon and got off a dangerous cross. Right midfielder Zeca Ferraz reacted first and rose above a pack of FC Dallas defenders to head a shot past goalkeeper Jimmy Maurer from close range.

FC Dallas rolled out 10 substitutions at halftime, leaving only Maurer in place from the first half.

In the 62nd minute, Tesho Akindele cut inside from his position on the left wing and found Brandon Servania in the middle of the pitch with a sharp pass. The former FC Dallas Academy player did well to trap the ball before firing a shot towards goal, but his 23-yard attempt was well over the crossbar.

Tesho intercepted a pass and sped down the left flank in the 73rd minute of the match. The 2014 MLS Rookie of the Year played Roland Lamah a pass at the top of the area. Lamah tried to slip a pass to Cristian Colman at the back post but the striker could not redirect his shot on frame.

Chattanooga FC substitute David Perez nearly put the home team in front with a long-distance effort in the 76th minute. Fortunately for FCD, Maurer saw it the whole way and made an acrobatic save to his left side, pushing the attempt over the crossbar for a corner kick.

Brandon Servania used his heel to flick a pass into space for Colman in the 88th minute. Colman beat a man and attempted to find Tesho at the back post, but once again the pass was just off the mark. Tesho’s hurried attempt sailed high over the crossbar and the match ended in a 1-1 draw.

Hurry! Spots are filling up for the CFC Cornhole tournament. Drink @NakedRiverBrew beer and win cash before the gam… https://t.co/IiSLeV3vjV

RT @CFC_Women: Not our night. But we’ll always leave it all for Chattanooga. #BetterTogether https://t.co/z5OiNmLchM