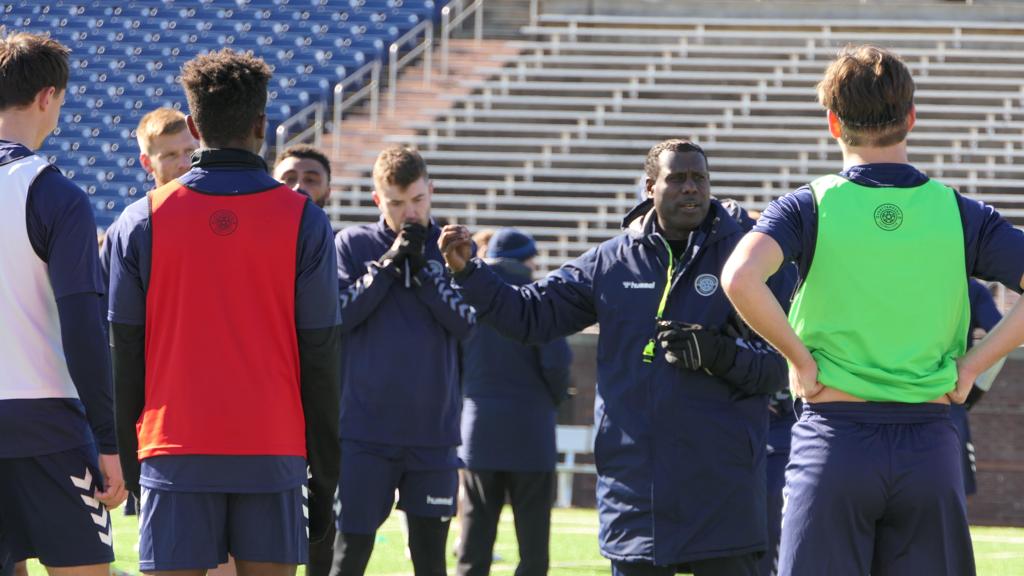 As Chattanooga Football Club continues its celebration of Black History Month, we have a candid conversation with Sporting Director & Head Coach Rod Underwood. He talks about breaking barriers, legacy, and the importance of communication.

Rod Underwood played for Furman University from 1985-1989. While at Furman he led the team in goals, earned all-conference selections three times, and was named the Southern Conference tournament MVP his senior year. He was also the first African American to play soccer for Furman.

What made you decide on Furman for your college playing career?

Furman recruited me early, stayed consistent throughout the whole process, and gave me a chance to play. There was never a conversation about breaking barriers as the first African American player in school history, they just gave me an opportunity. The racial aspect was never really a part of my decision, and it was never a reason for me choosing to play there.

Do you remember your experiences when you first began playing for Furman?

Absolutely. Furman is a very small school, and right away we were playing the big schools, South Carolina, Clemson, in fact my introduction to college soccer was against Duke and NC State. I was treated really well at Furman, partly because of being an athlete, and that’s the culture there. Being involved in the soccer program may have kept some eyes away from me being different. My philosophy has always been: “I do what I do, I like what I like,” and don’t worry about the rest.

Do you remember any challenges that you had to overcome because of race?

Oh sure, in sport there’s obviously always opponents trying to say things to get under your skin, so I often had to deal with that kind of thing. One time, everyone was coming in from a night out, and a security guard at the gate wouldn’t let us in. We even had a soccer brochure that showed we were on the team. It took some managers from security to convince them to let us back on campus.

What changes did you witness during your time at Furman?

I think that a lot of changes just happened while I was there. I pledged a fraternity, and as far as I know I was the only black person in the fraternity system at the time. In the beginning it was different, but once we all got to know each other, it became “Rod’s part of us.” Even to this day those guys are some of my best friends… I didn’t have a single bad experience from my teammates.

Just being there and being myself changed people’s perspective about race… as time went on, more black students came and opened doors for others, including more black soccer players.

Growing up there weren't a lot of black soccer players, so I was always a minority. That’s just how I grew up. It was just normal for me. Just being a kid and a teenager, it just was what it was.

What do you feel is your legacy for the Furman men’s soccer team?

It wasn’t purposeful for me to go to Furman and break barriers, but that’s what happened. It’s never been about that. It’s not about creating a legacy, it’s just about ‘how do I make things better for the next person.’ That’s how I approach coaching- How do I make these players better, even so that they achieve things I could never dream of?

How important is it to bring those ideals into the community?

Things like the CFC Foundation, Operation Get Active and CSM, are paramount to the success of making a generational impact. That’s my goal in life: Can you use the game to impact players and change lives. If kids have hope they can achieve anything, and seeing someone who looks like them might give them that hope. Then THEY can be generational impactors.

People think we’re super connected because of the internet and social media, but we’re really not. After spending time with people, you learn that we have the same drive, same anxieties, we’re just not taking time to get to know each other.

In our climate today, it’s important to think: What can we do to make it better? Can we just get to know each other in-depth, in a way that people will know that we genuinely care for them, and we are moving forward in a way that makes the best life for each other?