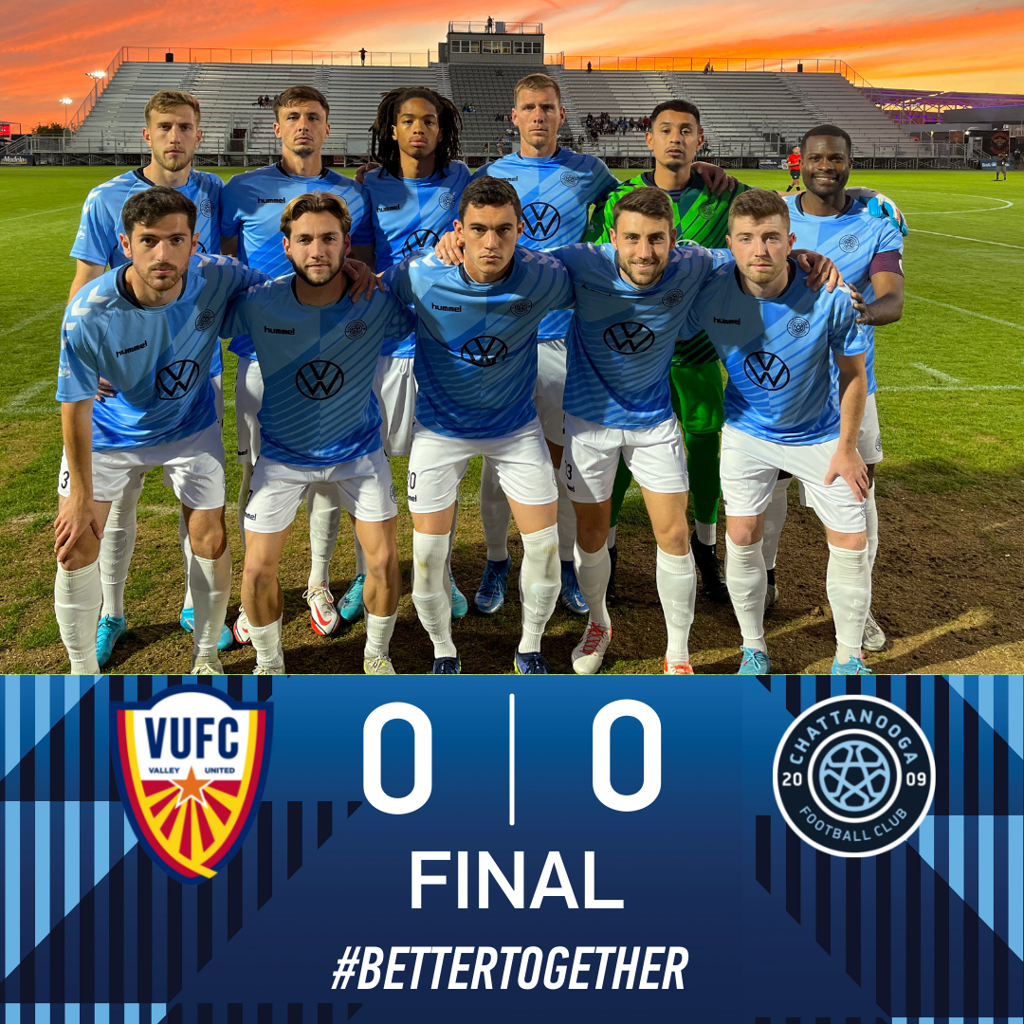 Mesa, AZ – Chattanooga FC shared the spoils in a goalless draw with Valley United FC as the two teams faced each other for the first time on a late Friday night at Bell Bank Park in Mesa, Arizona.

After having their match away to Syracuse postponed on April 3rd, Chattanooga FC completed their first away match of the NISA season, riding the high of a 3-1 victory over USL Championship side Memphis 901 last Thursday. NISA expansion side Valley United FC entered the match clear at the top of the West Division after picking up 7 points in their opening three matches.

Chattanooga FC started the match largely unchanged from their triumph over Memphis 901. Colin Stripling moved to the backline to cover for injured Franky Martinez, leaving space for Tate Robertson to make his first start of the season in the midfield.

The game started at a slow pace, with Valley United holding possession and Chattanooga FC threatening on the counterattack. A slew of fouls from Valley United saw two cards handed out within the first twenty minutes, one for a high boot and another for obstruction. CFC threatened from the subsequent free kicks but failed to create clear chances.

Things began to heat up around the 24th minute when Valley United player David Koloko smashed a shot off of Kevin Gonzalez’s crossbar. In the next minute, Taylor Gray was taken down in the opposition box but had a foul assessed against him. Tempers flared, and a scuffle between the two teams resulted in Taylor Gray receiving a yellow card.

Play began to open up as the half progressed, with Valley United’s best chance coming in the 33rd minute from a grounded cross that came agonizingly close to finding an unmarked man in the middle of the box. Brett Jones created Chattanooga’s best chance of the half in the 37th minute with some fancy footwork and a subsequent shot that forced keeper Javier Olmedo into a near-post save.

Valley United FC started brightly in the second half, peppering Kevin Gonzalez’s goal with chance after chance. Gonzalez made several crucial saves to keep things level despite Valley United’s surmounting pressure. Chattanooga did generate their own chances, with the best of the night coming in the 57th minute as Brett Jones just failed to keep his shot down as he stretched to get on the end of an Alex McGrath cross.

Head Coach Rod Underwood looked to change the game in the 63rd minute as Ian Cerro and Brett Jones made way for Damian Rodriguez and Marcus Naglestad. However, the two didn’t have many chances to impact the game as Valley United continued to keep possession and pressure Chattanooga high up the pitch. Tate Robertson picked up a yellow in the 71st minute for a mistimed sliding challenge, and threat-ending tackles from Valley United throughout the half saw their yellow card tally reach six.

Although many shots were taken throughout the match, neither team was able to create a clear opportunity and the match remained level to the final whistle.

Kevin Gonzalez put in a Man of the Match performance for Chattanooga FC, making several vital saves to earn his first clean sheet of the season. His work was essential in earning CFC their first away point of the season.

The game tonight was a tough one only to walk away with a point, said Head Coach Rod Underwood. But the determination of the players was exceptional. We get ready for the next one.

This result sees Chattanooga FC remain in fourth spot in the East Division, having now earned a point each from games against the leaders of both divisions. CFC returns to action on Wednesday as the boys in blue visit MLS side Atlanta United in the Lamar Hunt U.S. Open Cup. That game will be played in Kennesaw, GA and tickets are available at this link.

The next home game is April 30 when they host Flower City United from Rochester, NY. Tickets are available here.