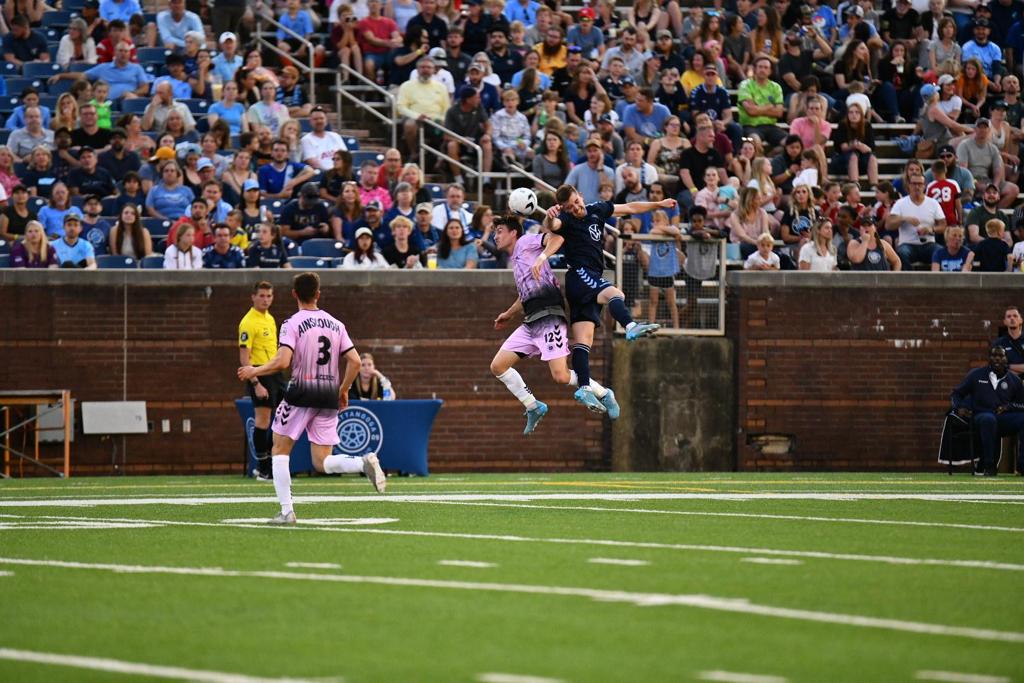 Both clubs entered the match in search on their first NISA win of the season. Chattanooga FC fell in defeat to MLS side Atlanta United 10 days earlier but remained undefeated in NISA play with two draws, while Flower City Union suffered its fourth successive defeat in NISA play last weekend at the hands of Maryland Bobcats.

Head coach Rod Underwood unveiled the same starting lineup that faced off against Atlanta United and Valley United in the previous two matches. Flower City head coach Zach Agliata made four changes for his side’s first ever trip to Chattanooga.

The first half was fairly one-sided, with Chattanooga FC generating several chances but failing to find the back of the net. Brett Jones spearheaded a Chattanooga attack that was quick off the blocks. Jones forced Flower City keeper Ortega into his first save in the 4th minute after putting his laces through a well weighted through ball. In the 16th minute, Jones chested a ball into Ian Cerro’s path, but Cerro could only volley wide.

"We feel good about creating the chances we did but really came down to us showing a little more patience a little more calm when the opportunity arises," said Underwood.

Chances continued to fall throughout the first half, with Jones, Cerro, McGrath, and Gray all challenging the Flower City defense but failing to score. Jones forced the best save of the half in the 44th minute as his attempted half-volley was palmed away from the top corner, shortly after Nick Spielman forced a point-blank save 10 yards from goal.

The script began to flip in the second half as Flower City’s Canas-Jarquin forced Kevin Gonzalez into a fine save within a minute of kickoff. Flower City continued to carry threat through a series of set pieces in the first twenty minutes of the second half, but none were threat enough to truly challenge the Chattanooga defense.

Looking to sway the balance of the game, Rod Underwood brought on Dalton native Damian Rodriguez and Roddy Green Jr., taking off Ian Cerro and Taylor Gray who were struggling to get on the ball in the second half. The change almost paid dividends in the 78th minute when a clever corner routine allowed Tate Robertson to line up and take a shot at the top of the box that cannoned off the crossbar. Before the defense could recover, Roddy Green Jr. got a head on an ensuing cross but was denied by the left post.

In further pursuit of a goal, Markus Naglestad came on for Brett Jones in the 82nd minute. Chattanooga continued to press, winning a slew of corner kicks. In the 85th minute, one of these corners found the head of Travis Ward, who headed the ball onto the crossbar, deflecting to the ground but not quite crossing the line. Chattanooga had committed too many men forward, and an immediate Flower City counterattack allowed Lukas Fernandes to receive the ball just inside the penalty area and bend a shot around Kevin Gonzalez.

Chattanooga pushed for an equalizer, continuing to take shots, but in the end the boys in blue ended a hard-fought match with nothing to show for, thrice denied by the goal frame.

Despite the result, Chattanooga FC had several standout players. Greg Stratton put on a solid display at fullback, quick to step and make important interceptions. Brett Jones provided the greatest threat in the first half, getting on the end of long balls and forcing the Flower City keeper into several saves. The group of substitutes all came on with a hunger to score and nearly changed the game. The players have a platform to build on as they aim to turn around their NISA fortunes.

"I really don't have words to express the way the crowd supports the club," said Underwood. "Every time as a team and as a staff we want to play the best we can to return the support the fans show."

As for whether changes are in store to end the scoring drought, Underwood added, "We are always examining every aspect of who plays and how we train to finds ways to get us the place we want to be as a team."

The CFC men have the chance to return to winning ways next Saturday as they travel north to rematch with Maryland Bobcats who drew 1-1 at Finley Stadium in March. They return home on May 28 to face Bay Cities FC from San Francisco. Tickets are available here.