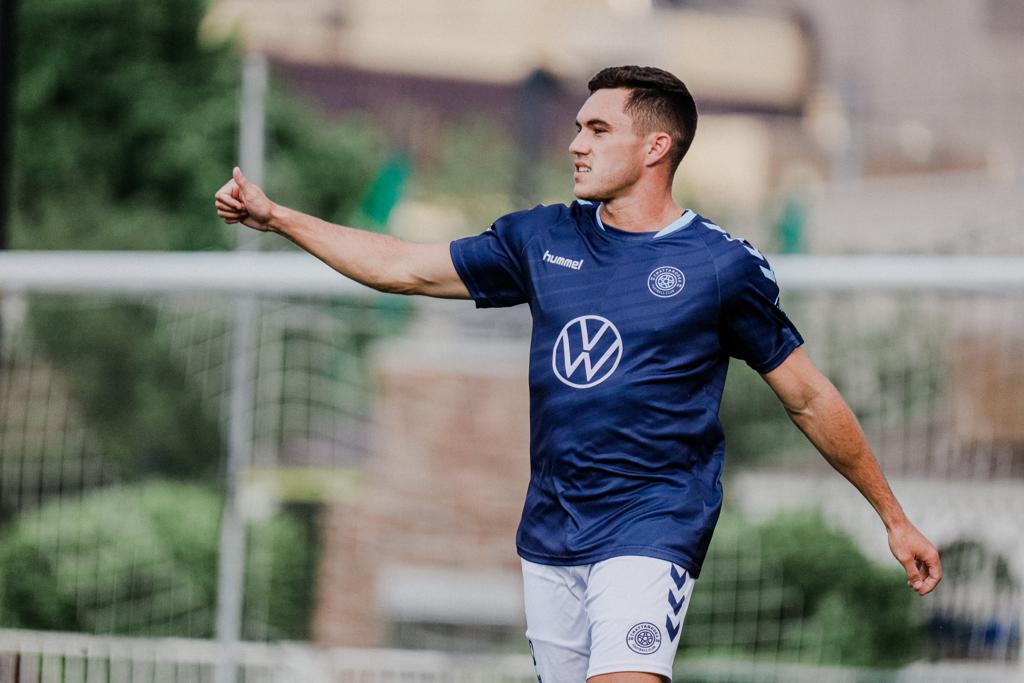 Chattanooga FC turned on the style with a 5-1 win over Flower City Union at Rochester Community Sports Complex. Hat-trick hero Markus Naglestad rose to the occasion as the Boys in Blue earned a second road win in a row to avenge the previous meeting between the two sides.

Chattanooga FC had a two week break before this match following a 2-1 win in a successful visit to the Maryland Bobcats. Flower City Union also notched a 2-1 win over Maryland last weekend for its first home win of the season.

Franky Martinez returned to the starting lineup, coming back after recovering from surgery to repair a fracture in his arm.

Chattanooga FC wasted no time in taking control of the game. Flower City learned from Maryland’s mistakes, leaving little space behind the defense in a low, defensive block. Chattanooga was forced to play a skillful game between the lines of the Flower City defense, and the Boys in Blue were up for the task.

Naglestad opened the scoring in the 12th minute. After getting fouled just outside the 18-yard box, Markus drove a well struck free kick across the goal, tucking the ball inside the far post to put Chattanooga up 1-0.

Ian Cerro got in on the action just two minutes later. After some great team play on the left side of the field, Naglestad slid the ball across the penalty area to find an unmarked Cerro at the far post, who had only to tap the ball into an empty net to extend the lead to two.

The game opened up after Chattanooga’s second goal. Flower City had a few chances as they grew into the game, but Chattanooga provided the bulk of the threat with the CFC attack peppering Flower City’s goal. In the 34th minute, Alex McGrath had a shot saved by Union keeper Ortega, but Chris Bermudez was first to the rebound to lift the ball into Naglestad’s path. Naglestad made no mistake with a calm volley through a crowd of defenders to put Chattanooga up 3-0 with his second goal of the night.

Two goals weren’t enough for Naglestad, who continued pressing for his third goal. In the 37th minute, the red hot Norwegian played a one-two with Brett Jones to slide past the Flower City defense and tuck the ball in the net, giving Chattanooga a 4-0 lead. Two minutes later, Flower City’s Suniel Veerakone pulled a goal back with a stunning strike from outside the box to give a slimmer of hope to the hosts. The teams went back to the locker room at the half with Chattanooga leading 4-1.

The game slowed down in the second half, but Chattanooga continued to generate a majority of the goal-scoring threat. With the game tucked away, head coach Rod Underwood brought on Alex Jaimes in the 74th minute. CFC continued to push for goals, with Alex McGrath skimming the crossbar after another creative free kick routine, and substitute Jaimes won a penalty in the 85th minute after rounding the keeper and getting his legs swept out from under him. Who better to dispatch the penalty than Naglestad, who calmly slid the ball into the bottom left corner for his fourth on the night, settling the game at 5-1.

Naglestad’s four goals were the most scored by a player in a single game in the league this season, and his five goals over the last two games are the most in the league. Before the game, Underwood noted the importance of players that could make an instant impact when coming into the starting eleven as Markus has for the last two games. “The goal is to have players that can contribute at any time, that is always the expectation.” Markus’s performance earned him the fans’ vote as man of the match.

Chattanooga’s biggest win of the season saw many more impressive individual performances. Franky Martinez played comfortably on his return from injury, pairing well with Colin Stripling to form a solid centerback pairing. Taylor Gray, Brett Jones, and the midfield three of Alex McGrath, Ian Cerro, and Chris Bermudez all contributed to the electric attacking display. Fullbacks Travis Ward and Tate Robertson put in a solid shift to nip Flower City’s attack in the bud while adding to the attacking threat on the wings. Overall, this may have been the team’s best performance of the year.

With the three points, Chattanooga FC move up to second in the East Division, only one point behind Maryland Bobcats with two games in hand. Chattanooga will have a chance to go top of the group next Saturday, May 28th, as they host Bay Cities FC at Fort Finley for a firework filled evening.