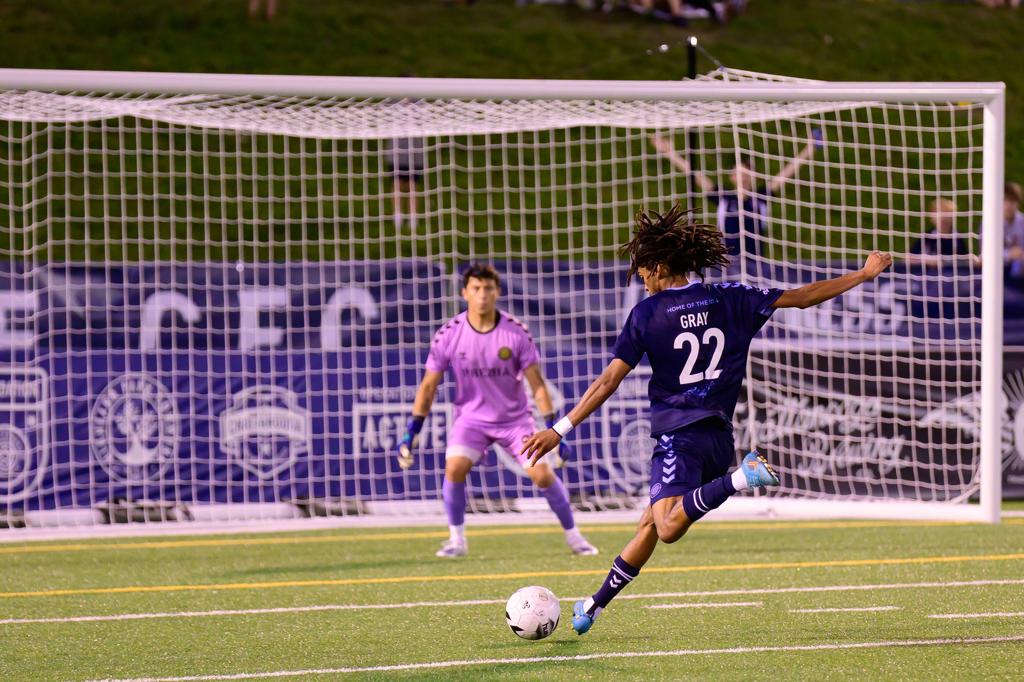 Chattanooga, TN- Chattanooga FC emerged victorious in a 4-2 thriller against west coast visitors Bay Cities FC on Saturday night. Taylor Gray’s hattrick made the difference as the boys in blue held off a second half comeback to secure all three points.

Chattanooga FC entered the match looking for a third win on the bounce following big wins away to Flower City Union and Maryland Bobcats FC. Bay Cities FC rolled into Chattanooga on the last stop of a three-match road trip, which featured a win over Maryland Bobcats last weekend and a loss to Michigan Stars on Wednesday.

Richard Dixon returned to the starting lineup, replacing Chris Bermudez as the only change from last weekend’s big win over Flower City Union.

Chattanooga FC seized control of the game early on, keeping swathes of possession in the Bay Cities half and hardly letting the ball cross half field. A series of fouls from Bay Cities aimed to stop the Chattanooga attack, but the boys in blue quickly unlocked the opposing defense. In the 7th minute, Brett Jones floated in a beautiful cross to find Taylor Gray waiting at the back post to nod home for the first goal of the game.

The dynamic of the game didn’t change much after the goal as Chattanooga continued to possess in the opposition half. However, the Bay Cities men did well to prevent many clear-cut chances.

In an effort to bring his side back into the match, Anders Perez made a halftime substitution and set his team up to take control of the match. Suddenly the matched opened open, with Bay Cities pushing much higher up the pitch and the boys in blue finding more joy in counter attacks.

In the 50th minute, one such counterattack found Taylor Gray and Markus Naglestad with space in the box to toy with the defense, who toppled over the latter to concede a penalty. Naglestad confidently slid the ball just inside the post to give keeper Alan Cruz-Gomez no chance to stop it, putting Chattanooga up 2-0.

Counterattacks continued to pay dividends for Chattanooga. In the 57th minute, Markus Naglestad found a wide-open Taylor Gray with an early cross. Gray calmly rounded the keeper and passed into an open net to extend the lead to 3-0.

However, with another substitution, Bay Cities finally found success in opening the game. A deflected shot from Edson Cardona found the back of the net in the 64th minute, and Ivan Valencia curled a beautiful shot into the far post in the 69th minute to pull the game back to 3-2.

After bringing on the fresh legs of Damian Rodriguez, Alex Hernandez, and Luke Ferreira, Chattanooga regained the attacking impetuous that put them ahead in the first place. In the 80th minute, Luke Ferreira backheeled the ball into the path of Taylor Gray, who slammed the ball into the roof of the net to complete his hattrick and bring the final score to 4-2.

After the match, the nearly 3,000 fans were treated to fireworks for the holiday weekend.

With three points in the bag, Chattanooga FC top the east division of NISA, reversing the fate of just a few weeks prior. Chattanooga’s crusade continues on June 11th as the club hosts AC Syracuse Pulse for the first time ever at Fort Finley. Tickets are on sale now at CFCTIX.com.