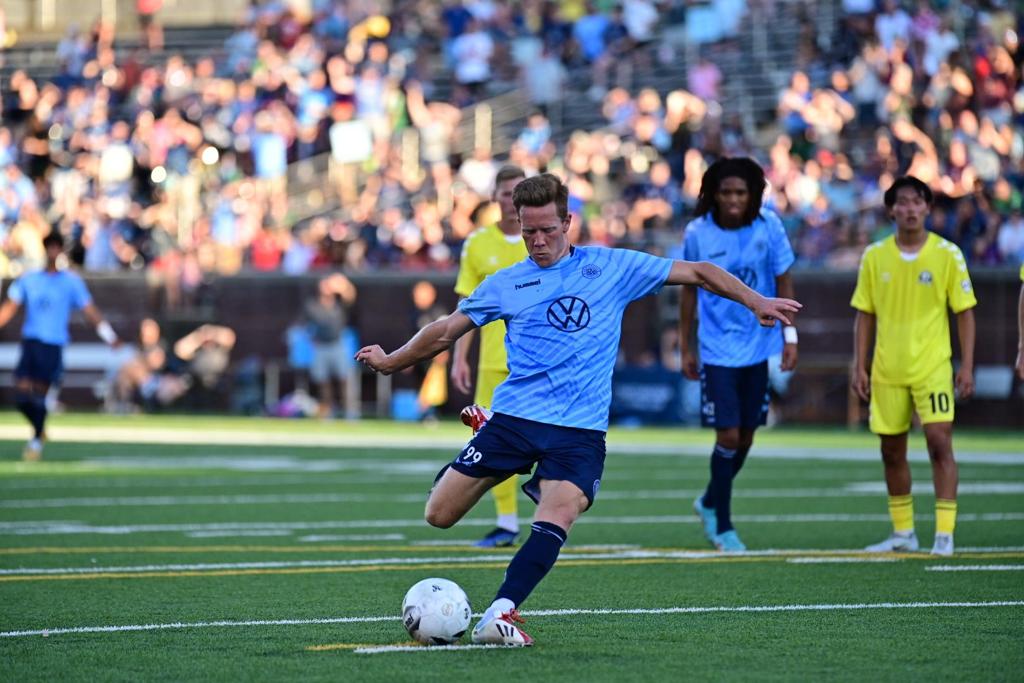 Markus Naglestad converts a penalty kick early in the first half

Chattanooga FC battled to a 3-0 win over AC Syracuse Pulse at Finley Stadium on Saturday night. The comprehensive victory was the fourth in a row for the red-hot men’s side.

The boys in blue entered the match already sitting atop the East Division of NISA. Coach Rod Underwood noted that “the standings are a reflection of the process we remain focused on pushing more each day.”

The boys in blue were quick to reveal their attacking intent, getting the ball into the opposition box early and often to overpower the Syracuse defense. It took less than five minutes for the ball to end up in the net. An endline cross from Brett Jones found the feet of Markus Naglestad, who unselfishly unloaded the ball to Taylor Gray. Gray made no mistake lifting the ball over a scrambling keeper to put Chattanooga up 1-0 in the 5th minute.

Peter Fuller’s Syracuse side did not shy away from playing physically, something that would lead to their detriment on several occasions. As the game settled in, neither team was creating clear-cut chances. However, an unnecessary tackle from a Syracuse defender brought down Markus Naglestad in the 30th minute. The goalkeeper had watched his film and picked the correct way to dive, but Naglestad’s inch perfect spot kick still beat the keeper to extend the lead to 2-0.

The second half was even more physical, with several scuffles among the players. Chattanooga played great soccer, holding spells of possession in and around the opposition box, but couldn’t quite find the net again. Things reached a boiling point in the 83rd minute when Richard Dixon was taken down by Syracuse player Alec McKinley, whose reckless slide tackle earned him a red card and an early trip to the showers.

Two goals weren’t quite enough, so in the 89th minute Alex McGrath dragged a shot across the goal, evading the keeper and tucking into the far corner of the goal to make it three.

With the victory, Markus Naglestad and Taylor Gray extend their scoring runs, and Kevin Gonzalez earned his second clean sheet of the season, assisted by a defense that was quick to step and break up any dangerous play that Syracuse produced. Rod Underwood was pleased that his system is now consistently producing entertaining soccer, stating “We have continued to implement our style and play the best version of ourselves each time we walk on the field. We remain committed to the same structure of our team, making adjustments that provide each player the best opportunity to play at a high level.”

They say it’s lonely at the top, but Chattanooga FC extended its lead in the East Division in front of nearly 3,000 fans at Finley Stadium. The conquest continues next week with west coast road trip to Bay Cities FC and LA Force, then a return to Fort Finley on June 25th.