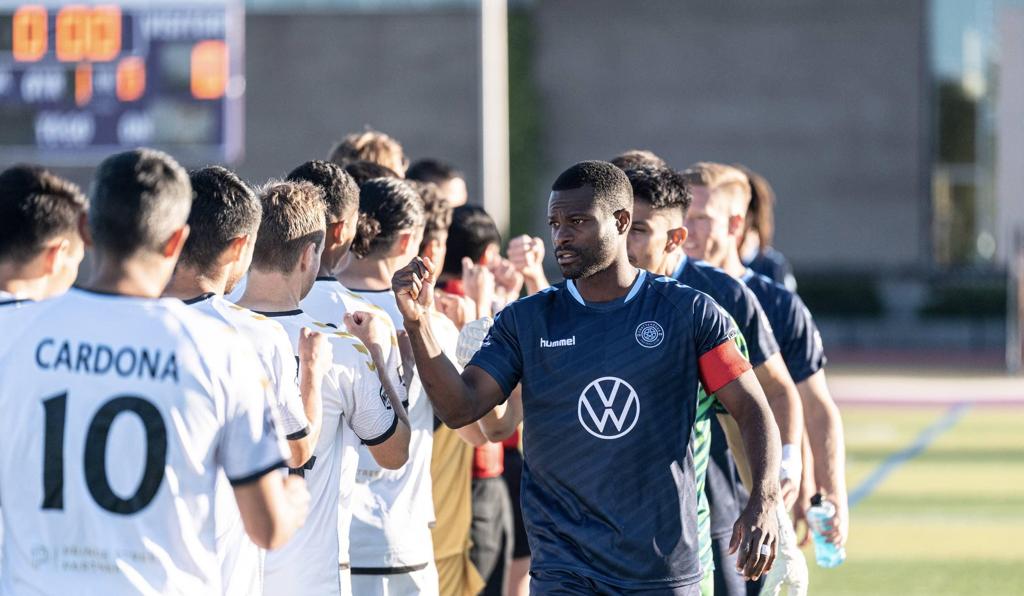 REDWOOD CITY, CA
Chattanooga FC registered a comfortable 3-0 win over Bay Cities FC on Saturday night. The boys in blue put on a dominant display to earn a fifth win in a row and maintain a perfect away record on the season.

Chattanooga entered the match on a hot streak, winning the previous four games by a margin of 14 goals to 4. Bay Cities came into the match on the back of a two-week break following a one-all draw at Albion San Diego.

Head coach Rod Underwood surprised no one as he unveiled the same starting eleven that has been dominating the NISA landscape, including a 4-2 win over Bay Cities at home last month.

The match was a high-octane affair from the first whistle, with the ball moving quickly up and down the pitch. Bay Cities set up to try to take the game to Chattanooga, but quickly fell victim to the most in-form offense in the league. Less than two minutes had passed when Markus Naglestad received a throw in and flicked the ball into the path a surging Brett Jones. Brett eyed up the rushing keeper who couldn’t stop him from tucking the ball into the near post to open the scoring.

The game continued at a high tempo, often forcing errors from defenders who were given little time on the ball. Taylor Gray pounced on one such error from the Bay Cities defense, picking up an errant pass and playing the ball to Alex McGrath. Alex was able to lay the ball off to none other than Markus Naglestad, who slammed the ball over the keeper to score in his fifth successive match.

Still pushing to put the game to bed, Chattanooga found yet another goal in the 36th minute. A smart corner routine from Chattanooga pinned in the goalkeeper, who was helpless to watch as Colin Stripling picked up the initial clearance and lofted it to an open Travis Ward at the back post, volleying into an open net to extend the lead to 3-0.

The game began to slow down in the second half, as Chattanooga kept one eye on fitness with an upcoming Wednesday matchup. However, the Bay Cities players kept pushing, eventually becoming frustrated with the solid defending and fluid play from Chattanooga. In the 88th minute, Bay Cities player Jacob Penner let his frustrations get the best of him as he put in a very late tackle on Alex McGrath, earning him a straight red just before the final whistle.

On the few occasions that Bay Cities broke through the solid defense of Chattanooga, Kevin Gonzalez was there to cleaning things up, patrolling his area well and making two incredible saves to keep his second successive clean sheet.

Tate Robertson earned the fans’ vote as player of the match after displaying an incredible work rate on the field, using his fullback role to successfully help both the offense and defense. The front three of Chattanooga put on a clinical display, becoming the joint highest scoring offense despite having played the least games. Solid work from the midfield controlled much of the game, and the defense negated much of the threat that Bay Cities, the other highest scoring offense in the league, had to offer.

Chattanooga FC continues on the road with a midweek clash against familiar foes in the Los Angeles Force on Wednesday. The boys in blue return to Fort Finley on Saturday to host another NISA regular, the Michigan Stars, on June 25ths. Tickets available at CFCTIX.com.