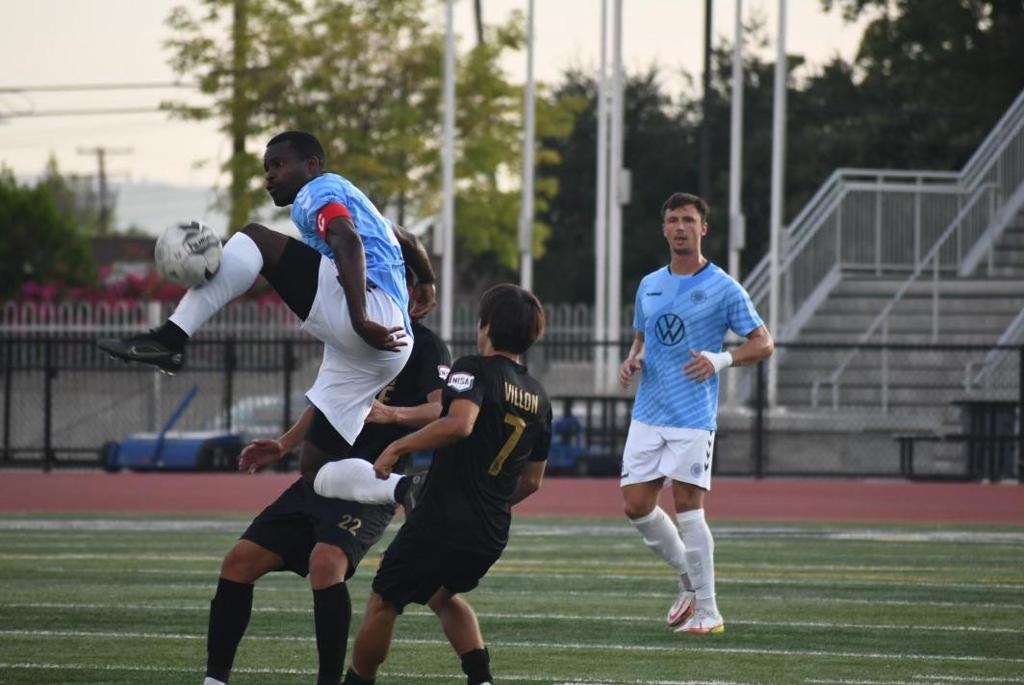 Richard Dixon puts in the aerial effort vs LA

Chattanooga FC earned a point on the road with a 1-1 draw against the Los Angeles Force. Neither side was able to find the decisive moment in a very physical battle on the west coast.

Both sides came into the game in great form; Chattanooga was in the midst of a five-game winning streak, and the Force had just picked up six points from a two-game road trip to New York. The two teams were in need of points for different reasons, with Chattanooga looking to extend their lead at the top of the East Division and Los Angeles fighting back towards playoff contention in the west. Both teams had displayed stingy defenses up to this point, letting in less than a goal per game on average.

Rod Underwood put his trust in the same starting eleven that beat Bay Cities FC by a margin of three goals to nil in over the weekend. The Force made two changes from their 2-1 win over Syracuse Pulse.

Coach Underwood’s trust was quickly rewarded, as it took less than two minutes for the boys in blue to score. Brett Jones got on the end of a long ball, which he teased into the box with a low cross. Taylor Gray was on hand to deflect the ball towards goal, but the keeper was quick to save it. The LA defenders may have been guilty of ball watching as in-form Markus Naglestad reacted first, volleying the rebound into the net to open the scoring. With that goal, Naglestad brought his scoring streak to an incredible six games in a row.

After the goal, the game ebbed and flowed, with each team enjoying spells of possession. Kevin Gonzalez was tested several times at his near post, while the Chattanooga men made sure the Los Angeles keeper had work to do as well.

If the game wasn’t electric enough, halftime was extended for a lightning delay. When the game restarted, it was the Los Angeles men that scored quickly. Edwin Rivas showed great skill as he dribbled to the top of the box and snuck in a powerful shot at the near post, leveling the game at 1-1.

For the rest of the game, the busiest person on the field was the center ref, having to manage a highly physical game, hand out several cards, and wave away appeals for penalties on both ends of the pitch. While both keepers were tested again, no more goals were scored as the late-night brawl ended level.

The fans voted Ian Cerro as man of the match for his work in the midfield, orchestrating the movement of Chattanooga and helping control possession for much of the game. The whole team put in a good shift, especially considering that this was their second road game in four days.

The draw sees Chattanooga’s unbeaten run extend to six games. Chattanooga sits five points clear at the top of the East Division of NISA. Lying in second place is Michigan Stars FC, who will visit Chattanooga this Saturday, June 25th, to take on our boys in blue at Fort Finley.