Boys in blue are undefeated in 7 games, sit atop the NISA Eastern conference standings. 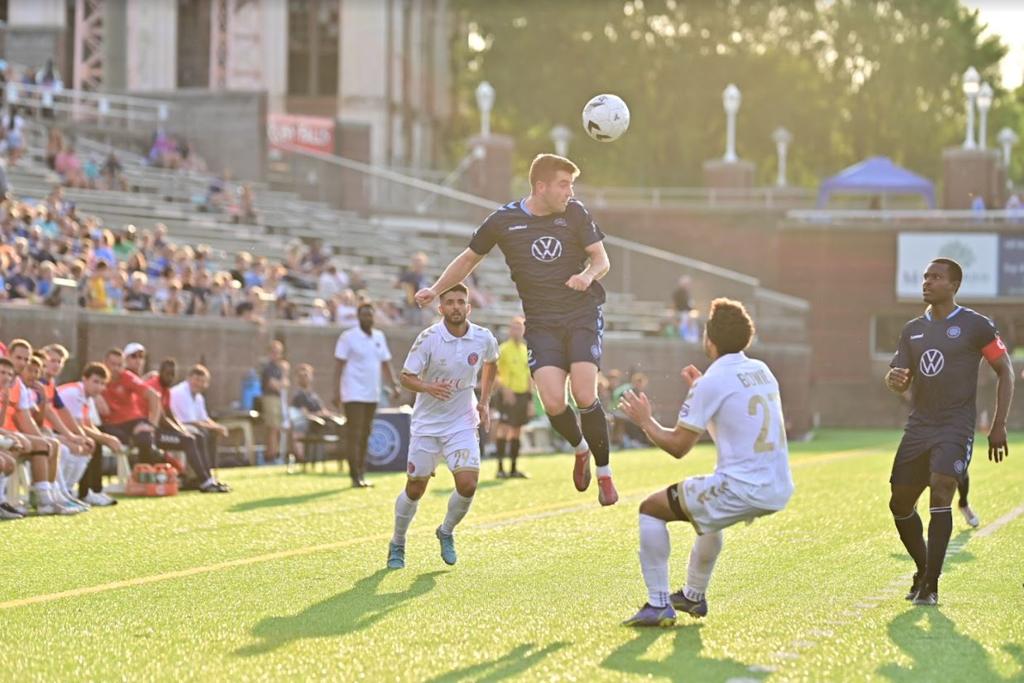 Tate Robertson leaps for a ball in the first half of play.

Chattanooga FC played out a 0-0 draw with the Michigan Stars on Saturday night. The Stars came to Finley Stadium to play defense and narrowly survived against a possession hungry Chattanooga side.

The boys in blue returned to the Scenic City after a road trip to California in which they earned four of six points available to extend their unbeaten run to six games. The Michigan Stars made the trip south on the back of a 1-0 defeat at home to the Maryland Bobcats.

Head coach Rod Underwood opted to bring a few fresh legs into the starting eleven for Chattanooga’s third game in eight days. Chris Bermudez replaced Brett Jones on the right side of the attack. Greg Stratton filled in at leftback in place of Travis Ward. The Michigan Stars also made two changes from its defeat last weekend.

Chattanooga possessed the ball through large swathes of the first half, but the Stars set up to frustrate the home team. The boys in blue faced a high block and high press that didn’t allow the team to push forward often. When the Chattanooga men broke through the Michigan ranks, the Stars were quick to tackle in efforts to dispossess Chattanooga, often successful but often conceding dangerous free kicks. Markus Naglestad had two tries on goal from free kicks, each going just narrowly wide of the Michigan post. Michigan offered little in terms of offense in the first half, more concerned about nullifying Chattanooga’s threat than scoring themselves.

Brett Jones came into the game at half time, hoping to stretch the Michigan defense with runs in behind. For a while there wasn’t much action, but Chattanooga started to pin in the Stars around the 70th minute. The Stars masterfully managed the game, fouling and going to ground when needed to prevent Chattanooga from getting momentum. Brett Jones created some great chances, forcing the keeper into two saves and drawing a goal-saving foul from the keeper, but the ball never quite found the back of the net. The Stars were lucky to end the game with eleven men with the quantity of cards accumulated and the leniency of the center ref.

Tate Robertson won the fans' vote as Man of the Match for his participation in a rock-solid backline that worked hard to pin in the Michigan attack and keep possession for much of the game. Kevin Gonzalez did his part in securing his fourth clean sheet of the season, and his third in the last four matches. While he had to use his feet more often than his hands, the few shots that Michigan had were well dealt with. Markus Naglestad’s incredible six game scoring streak came to an end as the team couldn’t quite break down a solid defensive block.

The ultimate result was foreshadowed well before the game began- the Michigan team bus parked just outside the entrance to Finley, just like the Michigan players parked the bus on the field. However, with the spoils shared, Chattanooga remain five points clear atop the East Division on a seven-game unbeaten run. It’s not long before CFC takes the field again to host the Syracuse Pulse on Saturday, July 2nd.