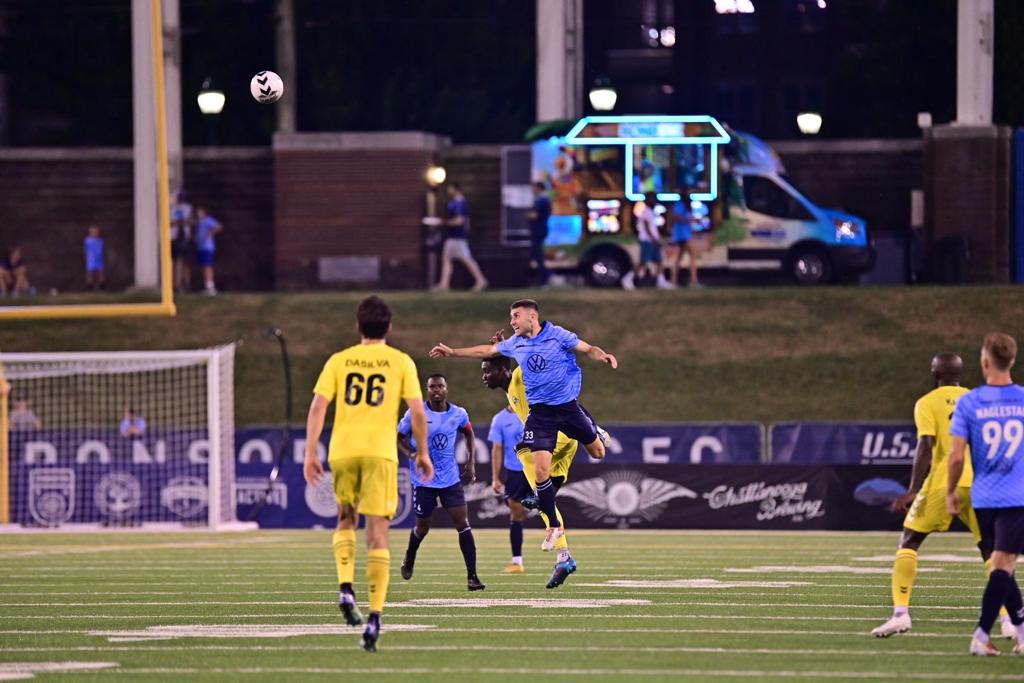 Chattanooga Football Club returned to Finley Stadium on Saturday night, looking to put on a show for the holiday weekend. More importantly, the CFC Men wanted to extend their unbeaten streak to eight and expand their lead at the top of the table. They would take care of both.

CFC hosted Syracuse Pulse for the second time in three weeks. The last contest ended in a 3-0 win for CFC at home. The next game would be intense from the opening whistle as both sides screamed back and forth across the pitch.

It didn't take long for CFC to get on the scoreboard. Greg Stratton found the back of an open net thanks to a short corner and perfect pass by Alex McGrath in the 18'. Fans would vote Stratton as Man of the Match, for that goal as well as solid defensive play for 90+ minutes.

CFC would keep the pressure on with four corner kicks in a 10-minute stretch.

Alec Redington got the start in goal for a banged-up Kevin Gonzalez and put in an excellent night of work, especially with two fantastic saves in the 28' and 31'. On the second save, Redington had to dive left to bock a well-struck curler and then caught his own rebound out of the air.

Taylor Gray would have a chance to put the Boys in Blue up 2-0 in the 35' but his shot was just wide right.

Syracuse would get on the board in the 40th minute and halftime would see the sides even at 1-1.

The start of the second half would see a few more corners earned for CFC and then a yellow card issued to CFC captain Richard Dixon in the 55'. In the 65th minute, Luke Ferreira would come in for Ian Cerro as the first substitution of the night for the home side.

Things got a little chippy for a few minutes until Markus Naglestad and brought down in the box. The referee pointed to the spot and Nagledstad would bury his shot in the 80th minute to give the home side the 2-1 advantage. That is Naglestad's 10th goal of the season, and enough to lead the league.

Roddy Green would come in at the 82' for Taylor Gray. Syracuse would pick up two yellow cards in the 86th and 88th minutes. As the minutes counted down and Head Coach Rod Underwood planned to secure the win, defender Nick Spielman would substitute for Naglestad in the 90'. The referee would add four minutes of extra time but CFC would have no problem killing the clock to secure the victory.

The win gives CFC added cushion at the top of the table. The CFC Men receive a much-needed break next weekend before hitting the road for two games in New York, versus Rochester's Flower City Union on July 16 and then at Syracuse Pulse on July 20. The Boys in Blue return to Finley Stadium on Saturday, July 23 for the Independent Cup final. Tickets are available now at CFCTIX.com