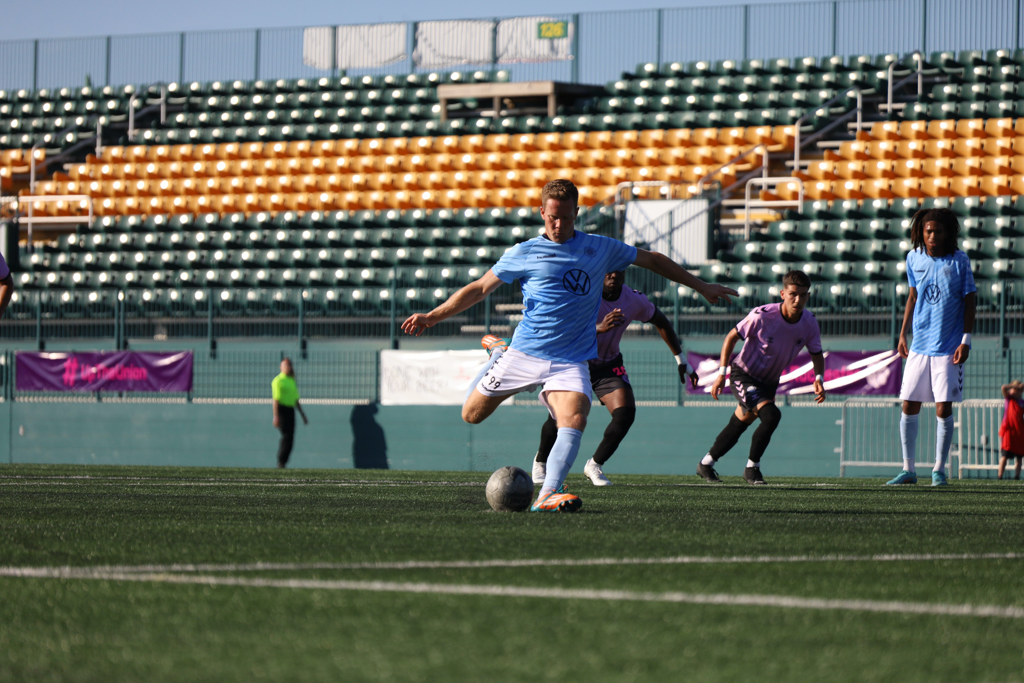 The boys in blue made the trip up north in the midst of an eight-match unbeaten run, which included a 5-1 thrashing of Flower City back in May. In contrast, Flower City lost 4-0 to Syracuse Pulse last weekend, the same team Chattanooga beat 2-1 at the beginning of the month.

Head coach Rod Underwood opted to make a few changes in his starting eleven. Alex Jaimes was given the nod to start in the midfield, while Chris Bermudez came into the lineup at left back.

The game settled into a routine quickly, with Flower City getting pushed back and looking for chances on the counter. Alec Redington was called into action several times, preventing the home team from taking the lead with fine saves. His performance would earn "Man of the Match" honors by the fans' vote.

On the other end of the field, it didn’t take long for Chattanooga to start turning the screw, putting more and more pressure on the home defense. In the 16th minute, with Flower City hanging on for dear life, Brett Jones drove into the box and got taken down to win a penalty. Up stepped Markus Naglestad, the league's top scorer, to take the penalty kick. Naglestad placed the shot just between the post and the gloves of the outstretched keeper, opening the scoring at 1-0.

Both teams threatened in the following minutes. Taylor Gray forced a save from the Flower City keeper in the 27th minute, and Franky Martinez made a crucial goal-line clearance in the 32nd.

In the 33rd minute, a beautiful through ball forced FCU keeper Ortega off his line to make a big save at the top of the box. Unable to hold onto the ball as his momentum took him outside of the box, Ortega allowed the ball to fall to Taylor Gray, who chipped the ball towards the open net. The ball bounced off the crossbar, but Naglestad was on hand to play with the defense, nearly forcing an own goal before slamming home himself for his second goal of the night.

The great Norwegian goal scorer turned assister just a few minutes later. In the 35th minute, Naglestad picked up a loose ball near the top of the box, drove forward, and squared the ball across the face of the net. Alex Jaimes slid in to direct the ball goalwards, scoring his first professional goal and taking the score to 3-0.

Not much changed in the second half. Chattanooga camped out for much of the period in Flower City’s half, probing the defense with all sorts of crosses and interplay. Bermudez, Naglestad, and McGrath all took shots, but the score stayed level until beyond the 80th minute.

Flower City started pushing more men forward in search of their opening goal, but only to their detriment. In the 84th minute, a defense-splitting through ball from Franky Martinez found a perfectly timed run from Taylor Gray. Gray had 50 yards to run in space before he coolly chipped the keeper to up the score to 4-0.

Greg Stratton, Juan Hernandez, and Roddy Green all subbed in for the visitors late in the game. The fresh legs paid off as Green pulled off a great individual effort in stoppage time. A short goal kick from the Union never quite reached the FCU defender as Green nicked the ball and promptly curled an instep shot into the bottom corner of the net, settling the score at 5-0 and his first goal for CFC.

The holistic team performance took stand out performances from every position, the greatest of which came from Alec Redington. Voted man of the match, Alec made several crucial saves to earn his first clean sheet of the season. Everyone on the pitch worked hard, whether winning possession or creating chance after chance to overwhelm the home team.

With three more points, Chattanooga comfortably stands seven points clear at the top of the east division. The boys in blue will spend a few more days in New York for a makeup match with Syracuse Pulse on Wednesday afternoon.

The action then returns to Fort Finley on Saturday as Chattanooga hosts the southeast region final of the NISA Independent Cup on July 23rd. Tickets are available at CFCTIX.com.