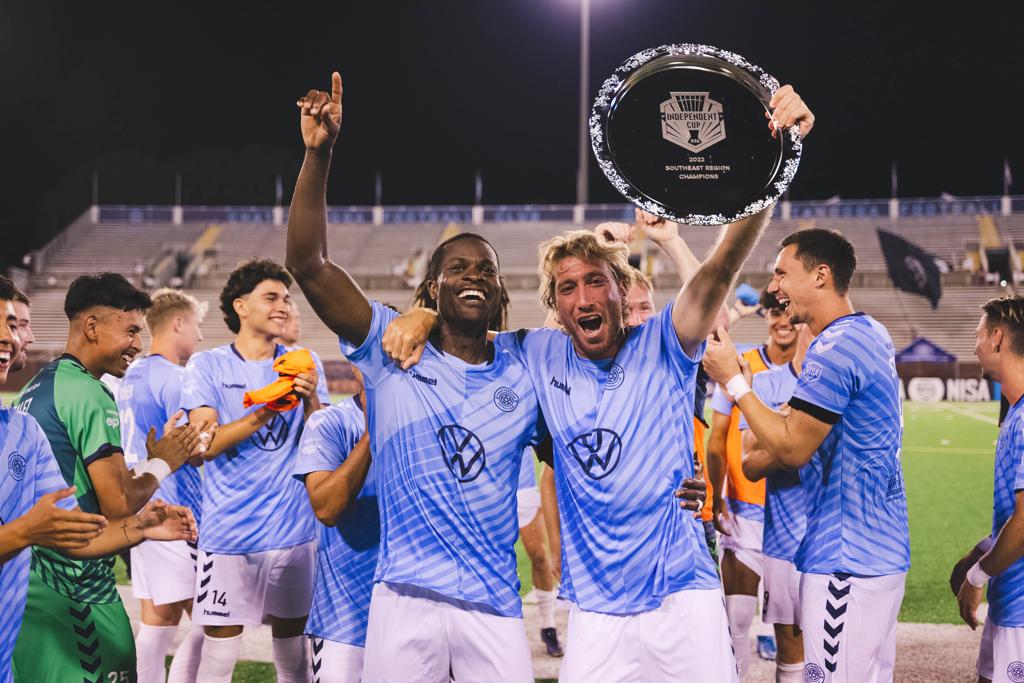 Chattanooga FC beat Club de Lyon in a thrilling 3-2 final as the boys in blue earned their first trophy of the season, the NISA Independent Cup. Goals from Colin Stripling, Markus Naglestad, and Taylor Gray were enough to fend off the resilient visitors at Fort Finley on Saturday night.

The Independent Cup served as a break from league action for Chattanooga FC, where the club remains undefeated since April. Club de Lyon earned the honor of facing CFC after defeating Brevard Fire SC and Miami Beach CF en route to the Southeast Final.

Chattanooga FC Head Coach Rod Underwood brought some fresh faces to the starting lineup after the midweek victory in Syracuse. Roddy Green, who scored his first goal for CFC last weekend, earned a start on the flank. Longtime CFC players Juan Hernandez and Nick Spielman started the game in the midfield and backline respectively. Chris Bermudez returned to the left back position, and Kevin Gonzalez started between the sticks to round out a strong starting eleven.

The match started with a slower tempo as the Chattanooga men tested the fortitude of unfamiliar foe. Great possession and buildup play showed the class and intent of the Chattanooga side in the search for an opener.

Chattanooga FC found that opener in the 19th minute with a creative set piece play. A clever cross from Alex McGrath found the head of Man of the Match Colin Stripling who nodded goalwards. The Lyon keeper got a hand on the attempt to keep it out, but Stripling volleyed in the rebound to put the home side ahead 1-0.

A defensive error in the 19th minute let Club de Lyon on the scoreboard. A giveaway on the CFC backline gifted Lyon player Ignacio Lopez a one-on-one chance on goal. Goalkeeper Kevin Gonzalez had no chance of stopping Lopez as his low effort slid into the net to level the score at 1-1.

Chattanooga FC had a chance to take the lead in the 24th minute as Naglestad was taken down in the box for a penalty, but the Lyon keeper guessed correctly and parried out Naglestad’s attempt.

Things got crazier in the 29th minute as a well-placed free kick from Club de Lyon bounced around in the box before getting poked home by Mateo Boreli to give the visitors the advantage, 2-1.

Despite his earlier attempt being denied from the penalty spot,  Naglestad was not to be denied on the night. In the 40th minute, the Norwegian stepped up to take a free kick from 30 yards out. He made no mistake curling the ball inside the near post to level the scoring at 2-2.

Halftime substitutions brought on league regulars Ian Cerro, Taylor Gray, and Greg Stratton in an attempt to put the game to bed. While the CFC play was easier on the eyes, Club de Lyon had several chances on the break that forced Gonzalez into action to preserve parity in the match.

The Chattanooga offense began to pick up in the later stages of the half. McGrath forced an acrobatic save from the Lyon keeper in the 73rd minute, and it took a last-ditch tackle to deny Gray in the 75th minute.

Ultimately, the Lyon defense was unable to hold out. In the 82nd minute, a searching ball found McGrath on the break, who squared the ball back to Gray. Gray took the shot first time, slamming the game winning goal past the keeper.

The game played out in a series of fouls, chances, and scuffles, but it was the hometown Chattanooga Football Club that won the title of Southeast Region Independent Cup Champions.

Colin Stripling’s opening goal and solid defensive worked earned him the fan’s vote of Man of the Match. The whole team had an incredible work rate even after playing two games on the road in the last week. A rotated starting eleven was able to get the job done against a prolific amateur side.

The boys in blue return to league action in two weeks as they host Maryland Bobcats FC on August 6th at Finley Stadium. Tickets are on sale now at CFCTIX.com.