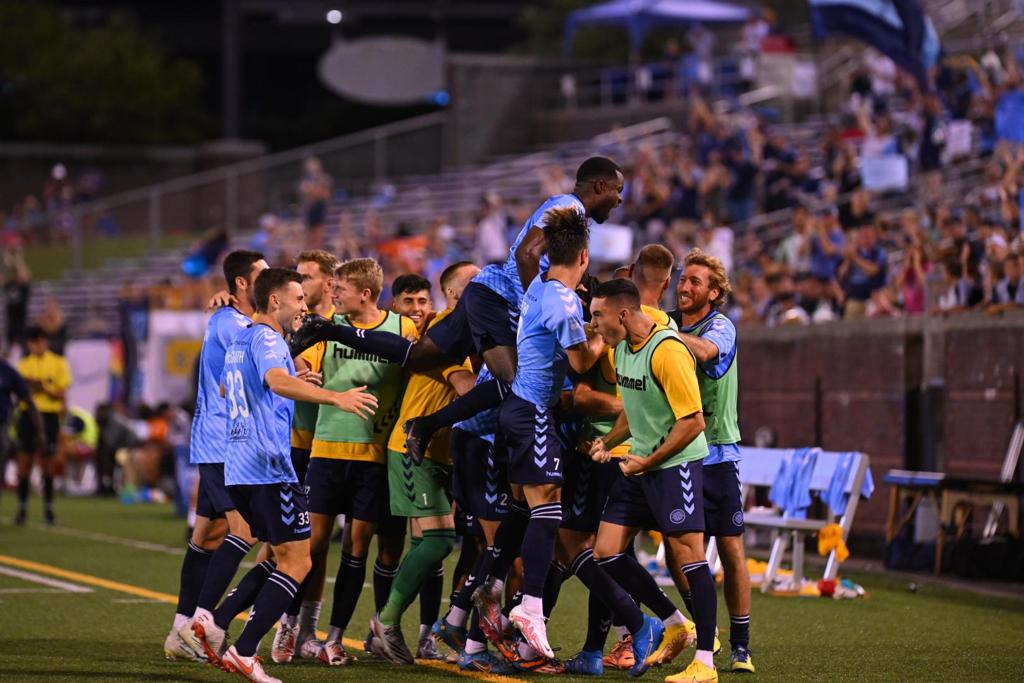 Chattanooga FC battled to a 3-0 victory over the Maryland Bobcats late Saturday night with an official attendance of 3,479. The only thing more electric than the delay-causing lightning was Chattanooga’s first half attack, with goals from Markus Naglestad, Greg Stratton, and Taylor Gray.

Chattanooga FC had a two-week break in action prior to the match following a dramatic cup win in the NISA Independent Cup back on July 23rd. The Bobcats made the trip south after handing California United Strikers their first loss of the season in the midweek. Both teams were in search of three points in the battle for playoff positions in NISA East.

Five changes were made to Chattanooga’s starting eleven from the Independent Cup triumph. Taylor Gray and Alex Jaimes got the nod to start on the flanks on either side of the league’s top goalscorer, Markus Naglestad. Ian Cerro, Alex McGrath, and Captain Richard Dixon presented the midfield trio that has featured for much of Chattanooga’s unbeaten run. Greg Stratton, Franky Martinez, Colin Stripling, and Tate Robertson started in front of Kevin Gonzalez to continue the work of one of the stingiest defenses in the league.

The boys in blue were quick off the blocks, showing immediate attacking intent. It took less than 40 seconds to put a shot on target, and the Chattanooga players put wave after wave of pressure on the Bobcat defense.

The first goal of the game came as no surprise in the 7th minute. Markus Naglestad received the ball high up the pitch, slid past a defender, and struck the ball into the corner of the net to open the scoring. With that, Naglestad brought his tally to 15 on the season.

The scoring continued in the 30th minute with a great individual effort from Greg Stratton. Stratton stuck to the high press, winning the ball off the Maryland backline before rifling into the top left corner to put Chattanooga up 2-0.

Taylor Gray got in on the fun in first half stoppage time. Gray received a well timed through ball fifty yards from goal, which he carried all the way into the box, toying with the defense along the way, before hitting a low shot past the keeper for the third goal of the night.

With the three points all but earned at the half, the boys in blue looked to control the ball and see out the game in the second half. While Maryland looked to offer threat in attack, they never threatened Kevin Gonzalez in goal, who added another clean sheet to his tally on the night.

Throughout the second half, CFC Head Coach Rod Underwood brought on several substitutions to freshen the team. Travis Ward, Brett Jones, Roddy Green, Damian Rodriguez, and Juan Hernandez all came on to keep Chattanooga ahead.

The boys in blue had a few good chances in the second half; in the 70th minute, Gray saw an effort cleared off the line, and in the 75th minute, Jones had a well-earned effort saved by the keeper. Ultimately, Chattanooga always had control in a physical battle for three points.

Stratton earned the fans’ vote for man of the match. Beyond his incredible goal, Stratton patrolled the left flank to great effect, shepherding the Bobcat attack away from goal and causing the Maryland defense headaches. The whole team stood firm to earn a clean sheet and hand the Bobcats one of their biggest defeats of the season.

With the three points, Chattanooga FC now stands 7 points clear at the top of the table with a game in hand, undefeated since April. Fans won’t have to wait long to see the boys in blue play again. Chattanooga FC host an important match against California United Strikers, leaders of the NISA west division, this Wednesday, August 10th.

Tickets are available now at CFCTIX.com.