"Musings from my first and final Chattahooligans tailgate of the summer" 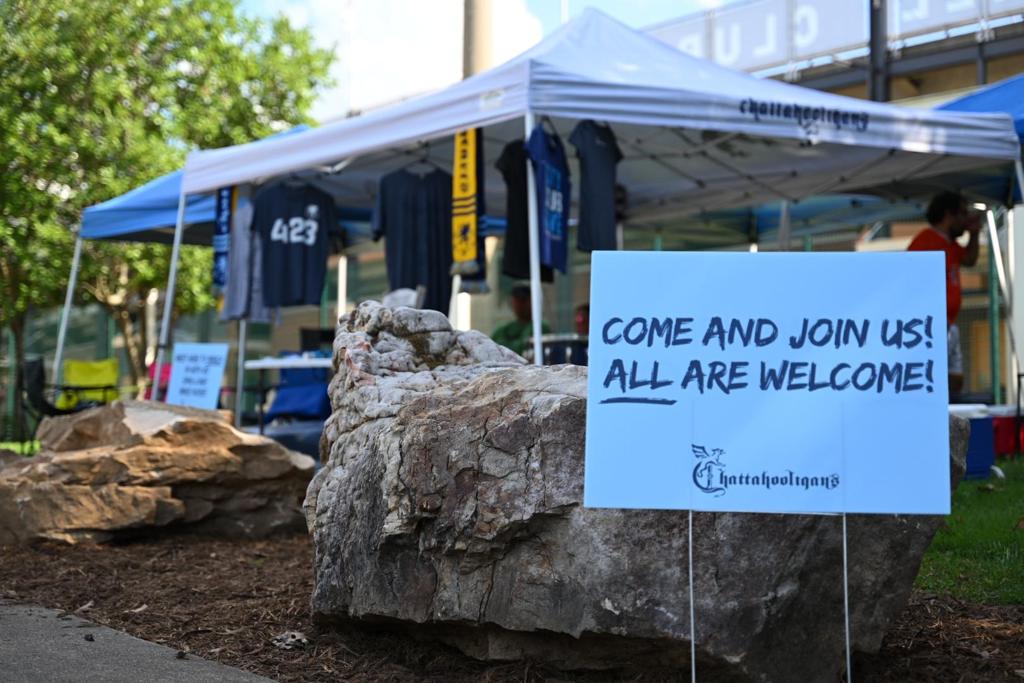 “All are welcome,” read a sign in front of a cluster of tents along the north side of Finley Stadium. I slowly entered the group of beer-drinking and conversation-having Chattahooligans, but from a distance. Unaware of how to initiate contact, I simply stood there and took in the scene of the tailgate.

There was a table with stickers, koozies and Chattahooligan scarves for sale. There were coolers aplenty, stocked with Hutton & Smith and Bud Light. On each face, a smile. In each hand, a Hutton & Smith or Bud Light.

“Someone say ‘hi’ to him, he looks like he needs something,” a woman with short hair in a navy CFC Owner tank top said.

I stepped closer to the crowd and introduced myself. “Hi, I’m Patrick.”

I joined a circle of a few Chattahooligans, none of whom I had met before but whose faces I had seen at previous CFC matches. If there’s one thing about the Chattahooligans, it’s that they’re consistent.

I told them it was my last day working as a communications intern for the football club, and that I wanted to spend some time with the Chattahooligans in their natural habitat. I had usually witnessed the antics of the CFC faithful as the game began, but had never spoken with them before their pre-game march into Finley.

As we talked at the tailgate, I was sure to find out more about each individual person. Murphy told me she had lived in South Dakota and New York before coming to Chattanooga. Upon hearing ‘South Dakota,’ Marty, a Florida native, spoke up.

“I dated a girl who lived in Minnesota once,” Marty said. He went on to tell us of his experience ice fishing in Minnesota, riding over a frozen lake on the back of a truck. His Hooligan associates, particularly a woman named Maria, expressed their dismay at the notion that one would drive along a frozen river in a 6,000 pound truck.

Another Chattahooligan, Murphy, countered with a tale of a community in South Dakota that abandons a truck on a frozen lake and takes bets over when it will crack the ice and sink into the lake. Maria questioned the small, but still relevant, carbon footprint of the tradition.

A man named George then told us of a town in Florida that was to demolish an old warship. The town sold raffle tickets at $100 each, with the winner earning the privilege of pressing the red button that blasted the ship into smithereens.

The Maryland Bobcats FC drove up to the north entrance of Finley – close to where the Chattahooligans had set up their tailgate. At first, Marty mistook the players as the CFC crew. As he cheered, those around him began to question his motives, telling him whose bus it really was.

At around 6 p.m. I wrapped up my time with the Chattahooligans and I decided I should probably head to my ‘real job’ located inside the walls of Finley. I shook everyone’s hand and thanked them for allowing me to crash their party. They all wished me luck in my final year of college and implored me to come back to a Chattahooligan tailgate next time I was in town. I think that I will take them up on the offer.

Later, once I had entered the stadium, reports of severe weather put a damper on the occasion. Chattanooga FC, the top team in the East League of NISA, seemed to be in danger of facing one of the worst phrases in sports: a rain out. Lightning just a mile or two from Finley and the seats were bare. Everybody was crowded in the concourse, the wind ripping through the arena. A storm was brewing.

The crowd gathered in the concourse amidst the windblown rain and it grew more and more likely that the game would be canceled. The one thing that was more consistent than the increasingly frequent lightning strikes was the noise coming from a group of adults, decked out in CFC gear, beating their drums and hollering songs and chants for their soccer club. 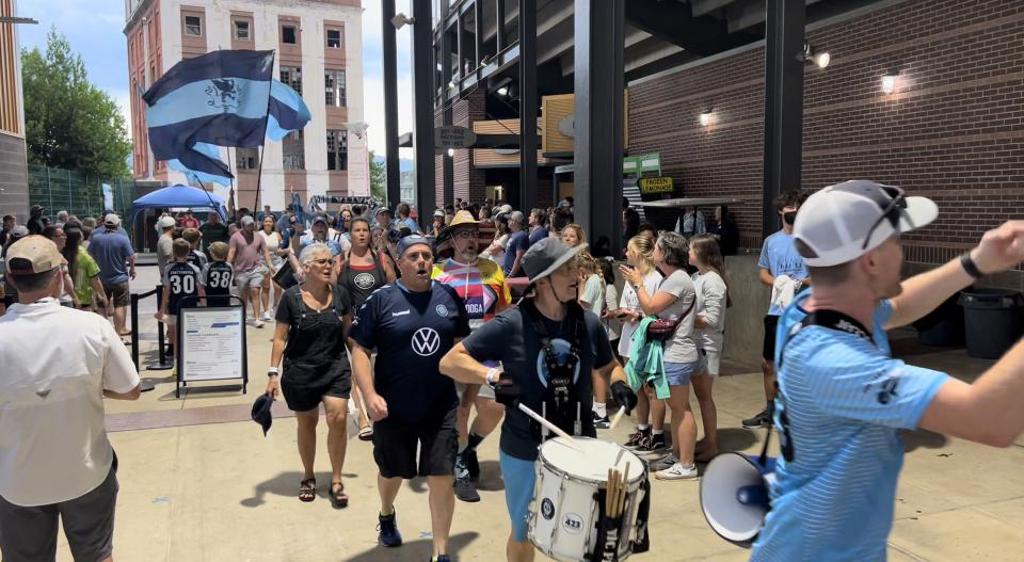 The crowd gathered in the concourse amidst the windblown rain and it grew more and more likely that the game would be canceled. The one thing that was more consistent than the increasingly frequent lightning strikes was the noise coming from a group of adults, decked out in CFC gear, beating their drums and hollering songs and chants for their soccer club. 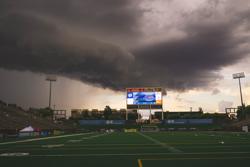 Finally, after hours of delay, the game was set to resume. Up in the press box, I could still see lightning in the distance. I was worried that my last game of the summer would be canceled due to the never ending storm that had struck Chattanooga. Fortunately the rain ended and a wave of rejuvenated CFC fans returned to the stadium. I was shocked at how many people had stayed through the rain delay – the stadium was as full as I had seen it all summer. Leading the crowd back into their sanctuary was, of course, Marty, Murphy, Maria and the rest of the Chattahooligans. Let the game begin.

CFC beat Maryland 3-0. Forward Markus Naglestad launched a dart to the back of the goal early in the game. Greg Stratton, on the day before his birthday, joined him in the scoring column with a beautiful drive to the goal, juking defenders before beating the keeper. Taylor Gray put the nail in the coffin with a stutter step that sent his defender flying, finishing his move with a shot that rolled right in between the keeper’s legs. Chattanooga’s defense was dominant, allowing zero shots on goal according to my unofficial stat sheet.

After the game, the players gathered in front of Section 109 and danced along to the beat of the Chattahooligans’ drums. As I scanned the stadium one last time, I thought back to meeting the Chattahooligans a few hours ago at that tailgate. I remembered shaking Maria’s hand, who reminded me that while it might not necessarily apply to the Maryland Bobcats, “all are welcome.” 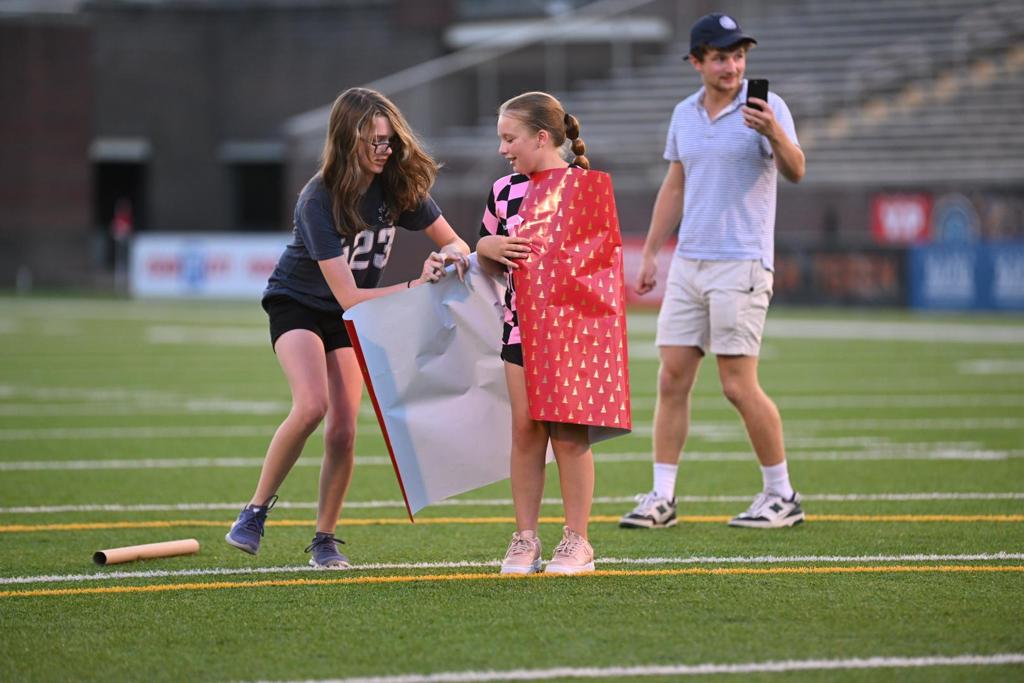 Editor's Note: Patrick Warren is a senior majoring in journalism at the University of Southern California where he is the sports editor for the school newspaper. Patrick is a Chattanooga native and attended the McCallie School. If you know someone who would be a good fit for a CFC internship, find more information here.