Top two teams in the league face off Wednesday at Finley 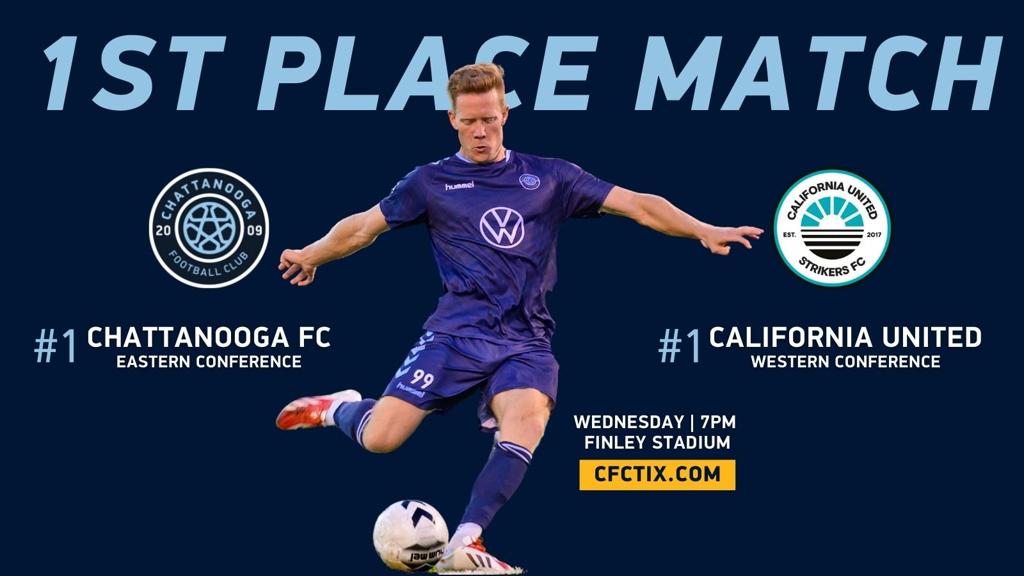 Chattanooga FC gets a short break and then prepares for what is arguably the biggest regular season game in its history as a professional club. The team returns to Finley Stadium for a clash with the Cal United Strikers from Irvine, California in what will pit the #1 Eastern Conference team against the #1 Western Conference team. The match is scheduled for an earlier kickoff at 7:00 p.m. EDT on Wednesday.

Chattanooga Football Club is coming off a dominant 3-0 performance on Saturday night against the second-place Maryland Bobcats.

All three goals came in the first half as Markus Naglestad, Greg Stratton, and Taylor Gray found the net. Goalkeeper Kevin Gonzalez made sure the other side of the scoreboard remained zero.

Chattanooga FC is on an 11-game unbeaten streak dating back to April. The team has outscored opponents 31-8 during that stretch.

“We had the weather delay on Saturday but generally I am pleased with how the guys handled that as professionals,” said CFC Head Coach Rod Underwood.

“Obviously going up 3-0 right before halftime was huge. We had tremendous support as always. We’re going to need all of them back on Wednesday because we have another tough opponent coming in.”

GOLDEN BOOT
There should be plenty of opportunity for goals in this match as three out of the top four goal-scorers are expected to be on the pitch. CFC’s Markus Naglestad leads the league with 13 goals. There is a three-way tie for second with CFC’s Taylor Gray, Cal United’s Tony Lopez, and Bay Cities FC’s Josiah Romero with 6 goals each.

CAL UNITED IN 2022
No team, except Chattanooga FC, has scored more league goals in 2022 than Cal United with 22 (CFC has 30). Cal United earned a 1-0 win on Saturday against 2nd place Michigan Stars from the Eastern Conference. In league play, Cal United sits in first place in the Western Conference with twice as many points as second-place ALBION San Diego. Wednesday’s match will be third in seven days during an east coast trip that saw them fall 1-0 to Maryland last Wednesday before winning at Michigan Stars 1-0 on Saturday.

This is the first meeting of 2022 for the two sides.

POPSICLES FOR KIDS
Chattanooga FC will cool things off by offering free popsicles to all kids at the match.

FREE KOOZIE
The first 600 people who buy a beer will get a free CFC koozie, courtesy of Chattanooga Football Club and Market Street Partners.

CAUSE OF THE NIGHT
Each home game of the season features a Cause of the Night, where CFC will recognize a community organization and make a donation of tickets sold to further their work. Wednesday's Cause of the Night is the the Company Lab (CoLab), which is a 501(c)(3) organization that helps accelerate local businesses.