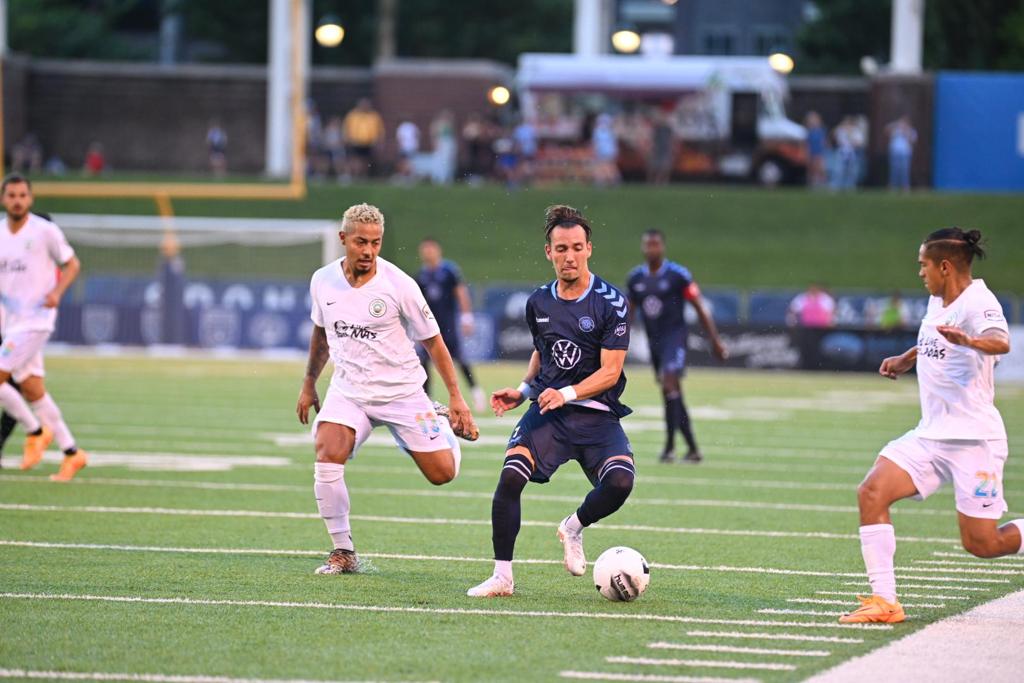 Chattanooga FC experienced a heartbreaking 1-0 defeat against the California United Strikers on Wednesday night. A 71st minute header from Alex Vedamanikam was enough to best the boys in blue and snap an 11-game unbeaten streak, stretching back to April.

The game was billed as the biggest in the league this season. Both teams were perched at the top of their respective divisions, with only one loss a piece all season. It was a battle of an unstoppable force versus an immovable object; Chattanooga FC boasted the best offense in the league, averaging 2.3 goals per game, while California United Strikers had the best defense, conceding less than a goal every other game.

Head coach Rod Underwood opted to make just one change to the starting lineup following the big 3-0 win against the Bobcats over the weekend. Travis Ward was brought in at leftback after subbing in at halftime over the weekend. The Strikers made 6 changes from their 1-0 win over Michigan Stars.

For the first ten minutes of the game, the two teams felt each other out, unafraid to send balls forward quickly and test the opposing backline. As the game progressed, Chattanooga began to boss proceedings, holding the bulk of the possession and pushing California back into their own half.

Chances started developing for Chattanooga as sharp passing broke down the visiting defense. In the 13th minute, Ian Cerro got on the end of a pullback to test California keeper Jean Antoine for the first time on the night. Alex McGrath earned a free kick on 16 minutes and curled it just outside the right post.

Chattanooga continued to send in shots throughout the half. Markus Naglestad and Alex McGrath barely missed the frame while Travis Ward stung the keeper’s gloves, but the ball never ended up in the back of the net.

A few halftime substitutions from California United shifted the tide of the game. Kevin Gonzalez was forced into action, making several crucial saves, including a big double save in the 52nd minute.

The home side had a chance to go ahead in the 65th minute. Taylor Gray worked hard to chase down a long ball and swung it back to Alex Jaimes, who took a touch before slamming the ball off the bar.

The boys in blue would be made to rue their missed chances in the 71st minute. A California cross found the head of Alex Vedamanikam who tucked the ball into the corner to take the lead.

The California players began pulling out every time-wasting tactic in the book, but the game wasn’t over yet. Chattanooga pushed forward in search of an equalizer, peppering the opposition goal with shot after shot. Taylor Gray, Brett Jones, Markus Naglestad, and Colin Stripling all tested the Cali keeper but ultimately the league’s top performing defense held firm, and the game ended 1-0 in favor of the visitors.

"You always want to win everything and learn by winning," said CFC Head Coach Rod Underwood after the game. "That's always the ideal way but that didn't happen. But we feel really good about where we are and excited about where we can go."

Despite the result, the boys in blue had a performance to be proud of. Man of the Match Taylor Gray showcased his talent in the attack, linking play and creating several chances after beating players out wide. Captain Richard Dixon was integral in breaking up California play and organizing an effective press. Kevin Gonzalez made several top drawer saves to keep the score in check. The team effort put forth was worth more than final result, and the home side still proved that they belong in the championship discussion at the end of the season.

Chattanooga FC remains 7 points clear at the top of the NISA East Division. The club only has to wait a few days for a chance to return to winning ways as the boys in blue head up to Syracuse to face the Pulse on Sunday, August 14.