CFC earns first round bye with win over San Diego

Chattanooga FC picked up a paramount three points with a 2-1 win over Albion San Diego on Wednesday night. Goals from Brett Jones and Markus Naglestad confirmed Chattanooga’s position as hosts of the NISA semifinals at the end of October.

Chattanooga and San Diego met just a few weeks prior in California, where the boys in blue also won 2-1. The Chattanooga players entered the game knowing that three points would be enough to solidify second place in the NISA standings, thus earning a first-round bye in the playoffs.

Head coach Rod Underwood made several changes to the eleven that beat Flower City Union over the weekend. Brett Jones joined the starting lineup on the flank, Nick Spielman slotted into the backline for Tate Robertson (who was suspended for yellow card accumulation), and Kevin Gonzalez started between the posts in an otherwise familiar formation.

We know the boys in blue like to score early, and they couldn’t even wait a minute to do so on Wednesday night. Alex McGrath swung in an early corner, and Brett Jones was on hand to bundle it over the line at the back post, putting Chattanooga up 1-0 with just fifty seconds on the clock.

Despite holding lots of possession, Chattanooga couldn’t keep the lead long. An Albion attack in the 8th minute resulted in a shot through a sea of bodies that Kevin Gonzalez couldn’t see in time to stop, and the visitors drew level at 1-1.

There were few clear-cut chances for the rest of the half, but both teams were pushing to score. Chattanooga found a lot of joy making space between the Albion back line, while the Albion players tried to capitalize on mistakes and quick counter attacks. The teams returned to the locker room level at the half, 1-1.

It was a cold night as the sun went down in Chattanooga, but things heated up on the field in the second half. The game was a tough, physical battle, and neither team held back in pursuit of a second goal.

That second goal came from a set piece in the 62nd minute. Alex McGrath swung in a free kick to Markus Naglestad, whose initial shot was blocked. However, as any elite striker would, Naglestad continued pressing, and a poor clearance from Albion fell to the feet of Naglestad who converted from close range, putting Chattanooga up 2-1.

The referee had lots of work to do keeping the rest of the match in check. Hard tackles, shirt tugs, cheeky dives, and yellow cards all intertwined with frantic play from Albion as they searched for an equalizer. However, the visitors were unable to get so much as a shot on target the whole half. Taylor Gray came closest to scoring in stoppage time as he caught the Albion keeper of his line but just missed the target.

After a ninety-minute display of hard work, physical play, and astute character, the boys in blue reached the final whistle to beat Albion 2-1.

Brett Jones’s first minute goal made him an early favorite as the fans voted him man of the match. His willingness to run after every ball added an extra dimension to the Chattanooga attack, not to mention his work tracking back to nullify one of the top offenses in the league. Six points earned in five days is a reflection of some of the top players in the league playing at their top level, and Chattanooga’s first round bye is fully deserved after an incredible season.

With the playoff position clinched, the boys in blue turn their attention to an unfamiliar foe on Saturday. MLS Next Pro side Charlotte FC II visit Finley Stadium this Saturday, October 1, followed by postgame fireworks.

Match Recap by Jed Henderson. Check out more content from this author at sceniccityfootballblog.com. 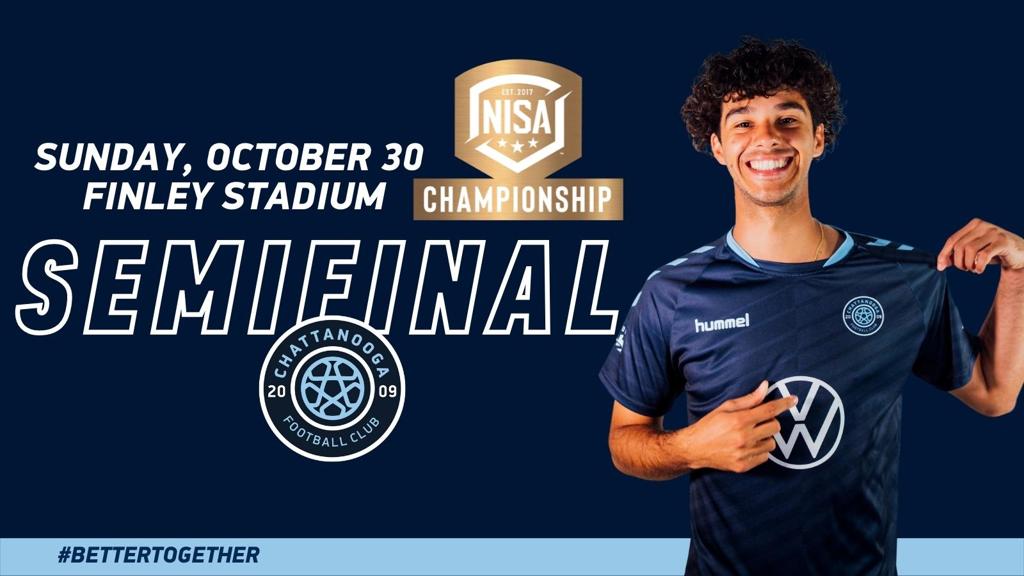